Terry Rozier's chances of playing against Nuggets is "50/50" 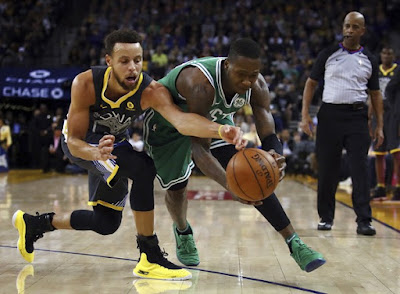 After spraining his right ankle in Saturday night's loss against the Warriors, Celtics guard Terry Rozier is considered a game-time decision against the Nuggets.

Although he managed to return to the floor at The Oracle after suffering the injury in the third quarter, Rozier said he was relatively sore after the game and Brad Stevens told the media his back up point guard wasn't going to partake in team shootaround Monday morning..


"Terry is not gonna go through shootaround," Stevens said. "He's 50/50 for tonight but we're not gonna have him go through anything this morning. He's sore. The swelling's not too bad but he sprained his ankle last game, and do we don't know yet for tonight."

If he is unable to go, the Celtics back court all of a sudden gets very thin at the Mile-High City (just like the air) without Rozier and Marcus Smart, who is in Boston recovering from a hand injury back he suffered back in Los Angeles.

Smart will have a follow-up on his recovery later in the week, according to Stevens, who says if Rozier is unable to play, expect to see Shane Larkin receive extended minutes and possibly a Kadeem Allen sighting, who is on a two-way contract and was recently called up from Maine.