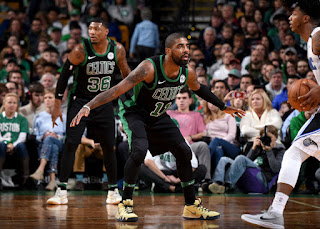 For the third straight game, the Celtics entered the fourth quarter facing a double-digit deficit. The first two ultimately turned into losses and Sunday's matinee against the Magic was no different.

Behind a lopsided third quarter, the Magic held on in the final frame in a 103-95 win. Orlando outscored the Celtics, 32-12 in the third quarter and eventually grabbed a 19-point lead -- their biggest lead of the day.

The Magic took a 90-71 lead into the final frame. The closest the Celtics came to rallying back from the large deficit was pulling to seven before Orlando held off Boston in the final minutes.

Kyrie Irving, coming back from his one-game absence due to soreness in his left shoulder, looked refreshed to say the least. He came out firing from the inside and out at the perimeter, draining 6-of-7 of his attempts, including a pair of 3-pointers and netted 15 first-quarter points.

Irving and Jaylen Brown (8 points) were responsible for 23 of the Celtics' 29 first-quarter points. By halftime, Irving had 24, still, Boston was clinging onto a one-point lead (59-58).

Irving finished with a game-high 40 points and Brown added 17 points. Marcus Morris, who got the start of Aron Baynes, added 12 points.

Orlando then turned in their best quarter of the day, outscoring the Celtics 25-8 in the opening eight minutes of the second half. That's when the Magic eventually opened up a 19-point lead, heading into the final frame.

Boston wasted no time in chipping away at its deficit, pulling to within nine when Tatum drained a 3-pointer w/6:34 left (93-84). It was a back-and-forth contest from there, until the Celtics pulled to within seven with under two minutes left after Irving drove in and hit a contested layup.

However, the Magic made the stops they needed before converting offensively and closed out the Celtics. Boston have now loss three straight and will look to bounce back when they kick off their west coast road trip Tuesday night against the Lakers.

Orlando did a tremendous job of getting points in the paint -- where they finished with 62 points. The Magic also turned 13 offensive rebounds into 12 second-chance points while they outdid the Celtics in the third quarter -- which really made the difference.