Report: Could the Celtics trade for Tyreke Evans? 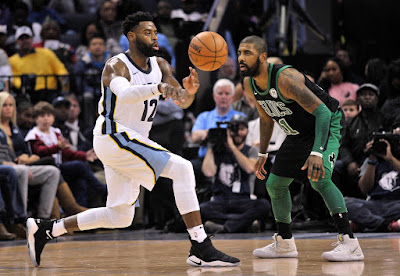 The Celtics could make a move to acquire Grizzlies guard Tyreke Evans ahead of the Feb. 8, NBA trade deadline, according to reports out of Memphis


Not confirmed. But don't be surprised if Tyreke Evans is moved to Boston
— Ronald Tillery (@CAGrizBeat) January 28, 2018

The Grizzlies have announced that Mike Conley will be out the rest of the season with a heel injury and it looks like the team could be heading into total rebuild mode, as they're 8.5 games out of the West playoff picture.

Evans, a nine-year veteran, was the 2009-10 Rookie of the Year while in Sacramento Kings, where he played for his first four seasons in the league, followed by three and half in New Orleans (briefly returned to the Kings at last season's trade deadline, as part of the DeMarcus Cousins deal).

The Grizzlies signed Evans on a one-year, bi-annual exception worth $3.29 million. The Celtics could use their $8.4 million disabled-player exception they received from the league after Gordon Hayward's leg injury in a trade for Evans.

The Celtics may also want to make bench players like Abdel Nader or Guerschon Yabusele available for Evans' expiring contract, or even include their own 2018 first-round pick.

Of course, this is all speculation, but if the Grizzlies want to move Evans, the Celtics are most likely the team to make the best offer for their sixth-man.

Listen to the latest episode of the Causeway Street Podcast, as we discuss Evans and other possible trade and buyout options for the Celtics below: