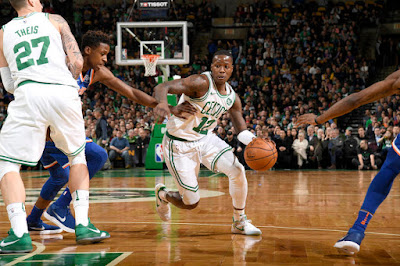 Behind an efficient offense and pesty defense, the Celtics knocked off the Knicks without their best scorer in Kyrie Irving and turned in a gem at TD Garden.

The Celtics managed to build on their momentum from the first half and an extraordinary third quarter -- where they built a 16-point lead -- while holding off the Knicks on the defensive end and cruised to a 103-73 blowout win. Terry Rozier's triple-double performance headlined the night, he was magnificent.

His 17 points, 11 rebounds and 10 assists exemplified the effort in his approach as he set the tone and it resonated throughout his teammates. Six Celtics scored in double figures in what turned into a lopsided affair by the fourth quarter.

It was the Rozier and Jaylen Brown show in the first quarter, the two combined for 18 of the Celtics' 27 points as Boston took a 27-24 lead into the second quarter. New York rallied back before the break, and pulled to within five points to end the half.

Boston kicked off the second half by slowing down their offensive attack, utilizing their bigs in Al Horford and Aron Baynes while the Knicks struggled to close the gap. The Celtics built a double-digit lead and took an 81-65 lead into the final frame.

But just before that, Morris took a really bad fall when he lost his balance after a fast-break dunk and fell really badly on his hip. The veteran big man took several minutes to get back up and had to be helped off the court and into the Celtics locker room.

Boston spent the rest of the night cushioning their advantage, which stretched out to 33 points at one point -- their largest lead of the night.

No word on how many games Kyrie Irving is expected to miss, Brad Stevens says he's day-to-day and will update his status prior to Boston's next game on Friday against the Hawks.

The Celtics offensive efficiency led to them only having nine turnovers while shooting nearly 50 percent from the floor (48.2). They converted on 40 field goals off of 27 assists.