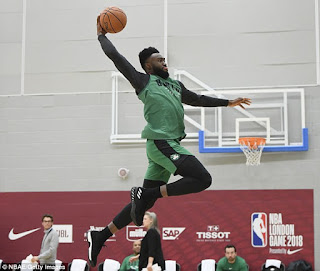 Celtics fans may get the chance to see Jaylen Brown showcase his high-flying abilities at this year's Slam Dunk competition.

Before Tuesday night's game against the Pelicans, Celtics guard Terry Rozier revealed that Jaylen Brown is interested in competing and hopes his name will be called as a participant for the All-Star Weekend competition.


"He's down with it, we just have to get the NBA to approve or whoever that's behind the whole thing," Rozier said. "He wants to do it, we talked about it on the plane plenty of times before, you know, the whole team so I think he's down with it."

Rozier also mentioned that if Brown does get selected, that Rozier would like to be assist his teammate in a dunk attempt and that he's been one of the guys that's been pushing Brown to take part in the All-Star competition.


"I'm one of the guys that's been trying to get Jaylen in it and I told him he better use me as a prop if he gets in it," Rozier said.

During a team practice in London, Brown and Rozier were seen taking turns in a mini slam dunk showcase. While Rozier completed some fancy high-flying moves we haven't seen before, he says he isn't quite ready to participate in the competition.

Click the video below to see what Rozier talk about Brown and why he would be a great contestant in next month's contest.