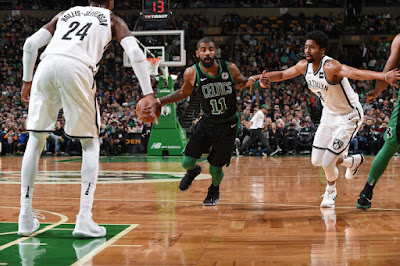 The Celtics will head into 2018 in style, capping off 2017 with their 30th win of the season as they prevented the Nets from closing the gap in the final minute of Sunday's game.

Brooklyn came within one 3-pointer of tying the game but fell short as the Celtics closed out their New Years Eve matchup with a 108-105 win against the Nets.

Irving netted 28 points on 10-of-21 shooting, impressive for someone who only made two trips to the free-throw line. He dissected Brooklyn's defense -- weaving through defenders, got to his spots and drained four from behind the arc. Marcus Morris' 15 points led the second unit alongside Terry Rozier (14 points) and Jaylen Brown, who returned to the lineup after missing two games, chipped in 13 points.

Rondae Hollis-Jefferson's 22 points led six Nets players in double figures. He led the comeback in the second half when the Nets erased a 14-point deficit. After the Celtics limited the Nets to 17 third-quarter points, Brooklyn found their offensive rhythm late in the fourth quarter when they went on a 10-2 run that was topped off by a 3-pointer from Quincy Acy with 18 seconds left.

Marcus Smart split a pair of free-throws after he was intentionally fouled, however, the Nets were quick in pulling the trigger on an inbound play out of a timeout. Not sure if head coach Kenny Atkinson drew it up this way but with 15 seconds to play with, the Nets only used two when Spencer Dinwiddle dribbled the ball and pulled up a well-contested deep 3-pointer that clanked off the rim and fell into Irving's hands.

Acy (14 points) finished with a game-high plus-17 player rating off the bench, while Caris LaVert's chipped in 16 points for the second unit.

With only Semi Ojeleye (back) still out, the Celtics head into 2018 with back-to-back wins and relatively healthy. They will host the Cavaliers on Wednesday when they will look to avenge their season opening loss at Cleveland.

The Celtics out-rebounded the Nets, 50-45, including 8 offensive rebounds that they managed to turn into 19 second-chance points. Brooklyn forced 17 turnovers and will have another chance to beat the Celtics when they host the C's next week.