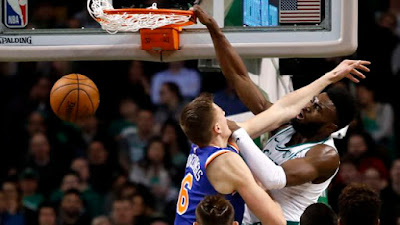 Jaylen Brown was asked to grade his dunk over Kristaps Porzingis after Wednesday night's Celtics win against the Knicks, and his answer may surprise you.

On a scale of one to ten where would you judge your monster dunk over Porzingis, Brown was asked.

Brown's humble response was followed by a funny impersonation of Celtics coach Brad Stevens, who reacted to Brown gingerly walking back to the other end of the floor as he soaked in the moment while fans at TD Garden went bananas.


"Get back, Jaylen! Jaylen!" Brown said with a smile while imitating his head coach. "Brad was pretty upset."

The Knicks quickly whistled for a timeout -- which gave Brown some more time to enjoy the moment of completing one of, if not, the best dunk of the season. But don't worry Celtics fans, Brown says there's plenty more where that came from.


"I got some that are lost in the fogs for sure," Brown said. "So there's some more to come. Just stay tuned."

Click the video below to watch Brown's full response to Wednesday night's 103-73 blowout win over the Knicks where he also responds to Draymond Green saying he should be an All-Star.