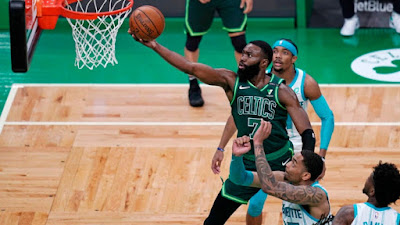 The Celtics snapped a three-game skid Wednesday night at TD Garden, beating the Charlotte Hornets 120-111 to avenge a loss from three days ago.
Jaylen Brown scored 38 points, going 13-of-23 from the field and 7-of-13 from deep. Jayson Tatum returned from missing Tuesday night's loss to the Oklahoma City Thunder with an ankle injury and netted 35 points on 12-of-23 shooting (4-of-10 from 3) to lead the Celtics to a 33-30 record.

"They came in and made it hard for us to be beat tonight," Boston coach Brad Stevens said of his two All-Stars.

While Brown has reached 30 points in three of his last five games, the Celtics remain tied with Miami for the sixth seed in the Eastern Conference. The top six teams avoid a seven-through-10 play-in tournament for the playoffs. Boston plays the Heat at home on May 9th and 11th, as the Celtics won their one and only meeting of the season.

"That's what it's all about," Brown said in his postgame presser. "Turning it up a notch, hitting the next level. The season's on the line. I feel like every leader wants to do that."

Rookie Aaron Nesmith finished with a career-high 15 points, nine rebounds, while Tristan Thompson added a double-double of 12 points and 13 rebounds for the Celtics, who had lost four of five following a six-game winning streak.
Devonte' Graham led Charlotte with 25 points, while P.J. Washington and Miles Bridges each had 19. Ex-Celtic and Hornets leading scorer struggled from the floor shooting 4-of-18 and connecting on 1-of-8 from behind the arc to total 15 points (nine in the fourth quarter).
Charlotte was also without Gordon Hayward (ankle), LaMelo Ball (wrist) and Malik Monk (ankle)
Celtics guard Marcus Smart was out after the NBA handed him a one-game suspension for "directing threatening language towards a game official" Tuesday night and Kemba Walker also sat out with an oblique strain, missing his second straight outing.
Robert Williams (four points, nine rebounds) made his return to the Celtics' lineup after missing seven consecutive games with a sore left knee, playing 17 minutes off the bench.
Brown came into a second night of a back-to-back after scoring 39 points against the Thunder, hitting a 3 at the buzzer -- to cap a 20-point first quarter -- and set the tone early, giving the Celtics a 39-19 advantage heading into the second period.
The Hornets beat Boston in a blowout 125-104 this past Sunday in Charlotte and they nearly pulled off a 20-point rally in the second half.
Boston gave up most of their first-half lead, following a Rozier 3 to cut it 99-96 with 7:23 to play. The Celtics used a 9-2 run following Brown and Nesmith each hit a 3-pointer to give the C's a comfortable 108-98 lead.
The Celtics win their season series against Charlotte (30-32) 2-1, giving themselves a 2.5 lead over the eighth seeded Hornets. With nine games remaining in the regular season, Boston will host the San Antonio Spurs (31-30) Friday night. Tip-off is at 7:30 PM.