Celtics clinch the best odds in landing No. 1 pick 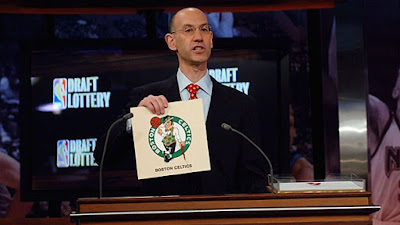 The Celtics officially have the best odds of landing the number one pick in this year's NBA Draft Lottery.

Thanks to the Suns, who beat the Oklahoma City Thunder 120-99 on Friday night, the Brooklyn Nets clinched the NBA's worst record at 19-60, while Phoenix is now 23-57 with three games remaining in the regular season.

Boston owns the the right to swap first-round picks with Brooklyn in June as part of the 2013 trade that sent Paul Pierce and Kevin Garnett to the Nets; the gift that keeps on giving.

The Celtics now have a 25-percent chance of landing the first pick, even though in 32 years of the draft lottery has the team with the highest odds has gottten rewarded with the top pick in only six occasions.

Phoenix has the second best chance at 19.9-percent, followed by the Lakers at 15.6 percent, the Philadelphia 76ers and Orland Magic have just over 10-percent shot at landing the number one pick on May 16, when the NBA Draft Lottery will be decided.