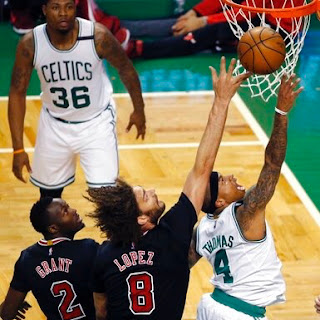 It's no surprise that the Celtics came up short in the rebounding battle against the Bulls in Game 1 of their opening round series. The C's have been a terrible rebounding team all year long -- however, their deficiency in cleaning the glass was alarming as Chicago annihilated the Celtics and now it's up to Brad Stevens to come up with a new game plan to correct his team's shortcomings.

Chicago not only finished plus-17 on the glass (53-36), they also pulled down 20 offensive rebounds which were converted into 23 second-chance points. Robin Lopez pulled down a team-high 11 boards, including 8 offensive.

Celtics coach Brad Stevens wasn't surprised by what he saw from the Bulls. Stevens didn't hesitate in reminding us that this isn't the first time the Bulls have exposed the Celtics' glaring weakness on the glass.


"They've been great against us all year," Stevens said. "I think you look out there at their size, so you've got to hit them early and don't let them get into the paint on their cuts, when they're cutting to the basket to get a rebound. Your contact has to be -- you have to make hard initial contact on block-outs; you can't just turn and look or get pushed under because they're going to get the ball. They're bigger than we are. So we have to hit first and so I'll go back and look at it, chart it all but that'll be a big deal moving forward."

In their four meetings throughout the regular season, the Bulls average plus-15 in rebounding, including their third meeting on Feb. 16 when Chicago out-rebounded the C's by 20. Celtics still managed to keep it competitive in a game that came down to the final second, yet, the Celtics still loss by one point.

Clearly, the Celtics -- the Eastern Conference's No. 1 seed -- don't always drop games where they're out-rebounded but when the game is in a half court set, much like we saw on Sunday, the Celtics offense tends to get stagnant. After the Celtics got off to a quick start by draining outside shots, the Bulls readjusted by defending the arc and challenging their opponent to take it to the rim.

That's when the Bulls made defensive stops down low and converted on the other end. But what helped Chicago gain more possessions was their rebounding, especially on the offensive end -- where they were able to score on second chances.

Al Horford, who put together a solid outing in his Celtics playoff debut, finished as the second-leading rebounder for the C's (Crowder pulled down 9). He grabbed 7 boards to go with his 19 points and 8 assists.

Horford says closing the rebounding gap was one of their biggest keys heading into the opening game of the best-of-seven series and says he will have to review Game 1 and will look to pinpoint where the Celtics went wrong.


"That is something that is one of the keys for us going into Game 1 -- doing a good job of that, we didn't" Horford said. "I'm very eager to go back and look at the game and see what kind of things we can do better. That's the key for us; we need to be able to hold them to one shot and that's how they were able to stay in the game in the first half and they made an impact that way. It has happened to us when we've played them this year, but we have to figure it out. I just think that we got to get those long rebounds, there's some that they are going to get but some of their longer rebounds -- 50/50 balls -- we need to come up with those. I think once I go back and look at the game I'll get a better sense and be able to talk about it more tomorrow."

Avery Bradley pointed to Lopez as his biggest concern when it comes to the Celtics controlling the glass. But doesn't think their shortcomings fall solely on their big men, Bradley believes it's going to take a group effort for the Celtics to stay afloat in the rebounding battle.


"I think a lot of it had to do with Lopez," Bradley said. "I think he had 8 offensive rebounds. We have to do a better job as a team in being able to contain him. Bigs have to box him out. Guards have to come down and rebounds so it's a team issue. We have to help each other out. Make sure we fix it for next game. If we were able to fix that, I think it's a different outcome tonight."

Celtics will have one day to regroup and figure out how to prevent the Bulls from dominating the glass in Game 2 as the best-of-seven series continues at TD Garden on Tuesday.