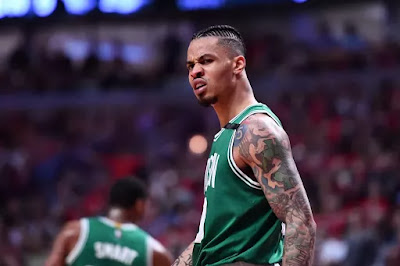 Gerald Green's professional career has certainly had its fair share of ups and downs.

From a promising teenage phenom turned-pro to an overseas journeyman who returned to the NBA with more than enough veteran experience to bestow on a young promising roster, it's been a wild ride for Green.

At age 31, Green is Boston's elderly statesman and has embraced a mentor role all year long. After nearly signing with the Clippers last summer, Green instead signed a one-year deal with the same Celtics team that drafted him back in 2005, when he was only 19 years-old.

Green averaged 5.6 points, 1.8 rebounds in 47 games for the Celtics throughout the regular season. And when the Celtics faced a 2-0 hole in their best-of-7 series against the Bulls, coach Brad Stevens needed to shake up his starting lineup.

But when he decided to turn to Green for Game 3, it was a surprise, to say the least. When Stevens hinted at a lineup change guys like Jonas Jerebko, Kelly Olynyk, Marcus Smart and Tyler Zeller came to mind.

Containing Robin Lopez, poor shooting and rebounding were all glaring weaknesses for the Celtics in Games 1 and 2. However, when Green eventually got the nod, the move made a lot of sense.

He inserted Green for energy, athleticism and scoring. In a small-ball starting five, Green's outside shooting could stretch the floor while his athleticism would help in defending Chicago's front court and in the rebounding department.

It paid off. In both games, Green quickly made his presence felt but in Game 4, he put together the kind of offensive first half that was just as good as any we've seen throughout the series.

His 16-point first half gave the Celtics a jolt and set a precedent for a huge scoring night against the Bulls. While Green spent time mentoring young guys like rookie Jaylen Brown and second-year guard Terry Rozier, he was also preparing himself for the playoffs -- where he believed his number would be called.


"I think you've gotta believe in yourself, I think you gotta put in a lot of work off the court to make sure you're ready," Green said. "You know the famous quote, 'sometimes you have to be ready so you don't have to get ready,' I do a lot of things that, it's like, off camera, that a lot of people don't see me do. So, I just always try to prepare myself like I'm going to play even when I wasn't going to play. And when I wasn't playing, my thing is, I was always enjoying the team's success, always enjoying somebody else's success."

Green finished with 18 points on 7-of-13 shots, and 7 rebounds on Sunday. And when he wasn't on the floor you could see him on his feet cheering on his teammates -- much like he's done all season long.

Hard to imagine what his season would have been like if he had decided to sign with the veteran-led Clippers. Maybe he would have had the same kind of performance in the playoffs, maybe not, either way, Green is in a good spot with the Celtics. His role with the team is a invaluable, especially for a young No. 1 seed team, looking to make a deep playoff run.

While most were pleasantly surprised by the resurgence of Green in Game 4, Isaiah Thomas wasn't. Thomas, who pushed for Green to sign with the Celtics during the offseason -- the two grew close as teammates in Phoenix -- said before the start of the postseason that the veteran forward would come up big in the playoffs and he was right.


"I've said it all along, 'he's going to win us a playoff game,' and I really believed that," Thomas said. "We have so much confidence in him. I know when he is on the court, he spaces the floor, not just for myself but for everybody. Even if he's not making shots, you have got to respect his shot because he is a hell of a shooter. I love when he's out there, because he give me space to work, and also another outlet when I'm in trouble, because I know he can knock down those shots."

With 30 career playoff games under his belt, Sunday's Game 4 was undoubtedly the best playoff performance of his veteran career. He will look to keep things going in Game 5 where the Celtics can grab a commanding 3-2 lead.

With Amir Johnson, who has played less than six minutes since being relegated to the bench, and Brown in Stevens' proverbial doghouse (averaging 5.5 minutes in the series), Stevens will continue to stick with Green in the starting unit. He clocked in over 20 minutes in both Game 3 and Game 4 and will continue to do the same as Stevens continues to ride the hot hand.