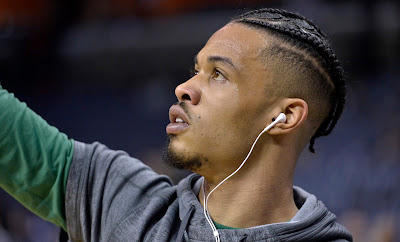 After a poor start to the series, very few expected Amir Johnson to be in Brad Stevens' starting lineup for Game 3 against the Bulls, but this is certainly a surprise to say the least.

Gerald Green will get the nod against the Bulls, he will replace Amir Johnson and join Al Horford, Jae Crowder in the front court with the usual back court duo of Isaiah Thomas and Avery Bradley.

Green, who hasn't seen the floor since Game 1 when he clocked in 5:34, will look to give the Celtics a boost offensively while causing mismatch problems for Chicago's big men. Green is not only a threat from outside, but also has the athleticism to blow past his defender off the dribble.

Green can also use that athleticism on the defensive end, along with rebounding capabilities. However, if the Bulls get off to a quick start, expect Stevens to turn to the bench for relief. Green will have a short leash in terms of playing time but will certainly provide much needed energy for the Celtics.

Nonetheless, Brad Stevens' move is still a surprising one, given the fact that Green played only 47 games throughout the regular season, including only seven with the rest of Boston's starting five.

He averaged 5.6 points, while shooting 40.9 percent from the floor along with 1.8 rebounds in 11.4 minutes throughout the regular season.