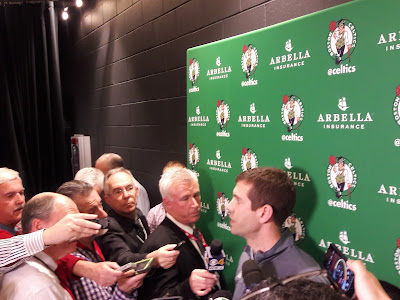 Although the Celtics are only one win away from grabbing the No. 1 seed in their final game of the season, Brad Stevens isn't letting that get to him or his team's head.

With a win against the Bucks on Wednesday, the Celtics can head into the playoffs with the best record in the Eastern Conference but according to Stevens, that doesn't mean much in conversations about which team is the best in the conference.


"Cleveland is the team to beat," Stevens said. "There's no question about that. They deserve that. They've been to back-to-back finals. So, until somebody knocks them off, as a defending champion, I think that's a fair way to view things."

As expected, Stevens isn't putting a lot of thought in the thought of grabbing first place. He's focused on taking down the Bucks in their season finale but is also content with his team's approach throughout the final stretch.


"Didn't think about, didn't really have put too much thought into it [grabbing the No. 1 seed]," Stevens said. "Focused on today's game, we'll see what happens. These guys [Bucks] beat us last time they were here -- the guys they have playing have given us fits so we're going to have to play well to win. That's that. I don't put a lot of thought into it. I'm excited about from an aggressive standpoint that we've been consistent in our approach, we too high or too low with regards to long losing streaks, when things don't go our way. I think most good teams go that way."

Is there a preference in which opponent Stevens would prefer to see in the first round?


"Our first round opponent is gonna be hard regardless," Stevens said. "At the end of the day, that's what it is. My focus isn't going to be on the numbers next to the names it's going to be on how you have to play to beat whoever you play."

What are two things he's most content about his team heading into the postseason?


"Number one: is availability, and number two: I'd say we've made some good strides with certain groups on the floor," Stevens explained. "I feel good about knowing our guys and knowing how they compliment each other and what each guy brings to the table. The value that they can add to help us win as we move forward so you feel like you have a pretty comprehensive view of all that as you head into next week.

The final two playoff spots (No. 7 & 8) will be determined by the end of the night -- when the Celtics will find out who they will be facing in the first round.