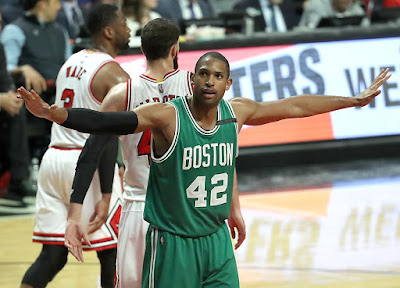 After facing a 2-0 hole in the best-of-7 series, Celtics coach Brad Stevens knew a change had to be made to the starting lineup.

Stevens' decision to start Gerald Green over Amir Johnson was a surprising one, to say the least, but certainly made a difference in Chicago -- where the Celtics won two straight against the Bulls to tie the series, 2-2.

It was a move that Al Horford says is the biggest reason why the C's managed to top the Bulls on their own floor.


"For us, the lineup change is what helped us [the most], I think," Horford said. "Being able to add Gerald to the starting lineup, I felt like that gave us better spacing."

Green certainly made his presence felt, especially in Game 4 when he scored 16 of his 18 points in the first half and finished with 7 rebounds in the crucial momentum-changing win. Now as the series swings back to Boston for Game 5, Horford is confident the Celtics can top the Bulls at home for what would be their first home victory of the series.


"We're gonna do what we do, that's just playoff basketball after you play a certain amount of games," Horford explained. "This is the ninth time we've played this team this year. I think it's just a matter of keep seeing the same guys, keep running the same plays over and over. For us it's just to make sure we go out and handle our business."

Aside from Green's Game 4 scoring outburst, Isaiah Thomas' attitude and his smile, along with his 33-point performance of course, certainly stood out on Sunday. It was the first time in the series we've seen that side of Thomas, since the untimely passing of his young sister, Chyna Thomas.

When asked about Thomas' demeanor on Sunday, Horford says spending time with family in his hometown before heading to Chicago definitely helped Thomas and made things a bit easier for him.

When did Horford notice the difference?


"It was probably right after Game 3," Horford said. "I just think him being able to be with this relatives and getting together with them -- think that helped him -- made it easier for him."

Horford didn't want to compare this year's Celtics team to some of his favorite teams in Atlanta but did say this is one of the closest teams he's ever played for. He says it's the kind of locker room that challenges one another and enjoys being around each other.


"We have a tight group, guys that really come into work and enjoy being around each other -- making sure that we're challenging each other on and off the court. I feel like we have a good environment in the locker room."