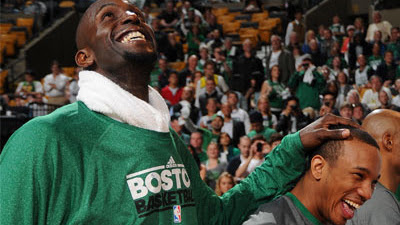 Kevin Garnett's presence was felt in the Celtics locker room, and KG didn't even have to step foot in it.

At the end of the Celtics' 104-87 win over the Bulls in Game 3, Avery Bradley revealed to ESPN on the sideline that Isaiah Thomas played a clip from Garnett -- sending a message to him and his teammates before taking on Chicago.


"Isaiah played a clip from KG before the game and it kind of got us going a little bit," Bradley said. "KG said some inspirational words for us, and it reminded us -- Celtics, we're always supposed to be the hardest playing team every single night. And we're supposed to use Isaiah's family -- use that as inspiration and come out and play hard for him and his family. And that's what we did tonight."

Bradley finished with 15 points on 5-of-10 shots, including 4-of-6 from deep in Game 3 and finished with a plus-22 game rating. Thomas scored a modest 16 on 7-of-18 but the Celtics shot close to 50 percent for the first time in the series.

Marcus Smart revealed some more details on Saturday afternoon of Garnett's inspirational words prior to their Game 3 win after practice.


“I just remember it was on a speaker,” Smart recalled. “Everybody knows when KG talks, his voice is very demanding, and you just listen. So everybody was quiet and just listening to what he had to say.” [Celtics.com]

The Celtics guard went on to talk about the part of the message that stood out the most to him before he and his teammates took the floor.


“He said, ‘I’m a Celtic for life. That’s what we do. We play. We’ve got to have dogs, and play like dogs. That’s what Celtics are all about,’ “ Smart recited. “That’s big for us, and that’s what we needed to hear: We’re all Celtics, and we need some dogs.” [Celtics.com]

During Garnett's time in Boston, he would call his top perimeter defenders 'pit-bulls.' Bradley was one of the few who earned that nickname playing alongside KG for three seasons and in Game 3 he proved to be that once again with his nitty-gritty defense throughout the night.

Smart, Jae Crowder and others also stepped up on the defensive end and played at a high-level, so much so that even Bulls coach Fred Hoiberg went as far as naming Bradley, Smart and Crowder "elite wing defenders," something that could not be said after Games 1 and 2.

In the end Garnett's message was loud and clear, and hopefully the Celtics have that same fire come Sunday in Game 4


"It was a reminder of Celtics family, " Bradley said Friday night. "We have to play a certain way, because they're watching."