Celtics can clinch the No. 1 seed with a win or Cavaliers' loss in season finale 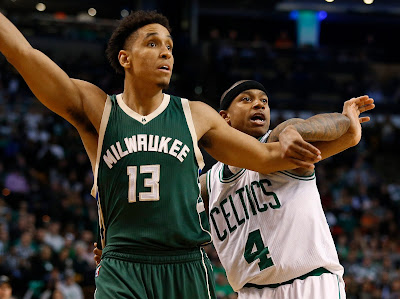 It has come down to Game 82 of the 2016-17 regular season for the Celtics, who currently at 52-29 can officially clinch the No. 1 seed in the Eastern Conferance with a win over the Milwaukee Bucks or a Cleveland Cavaliers' loss to the Toronto Raptors in their respective finales.

The Bucks at 42-39, have locked up the sixth seed and their first winning season since 2009-10, despite the Atlanta Hawks (43-38), winners of four in a row (including beating the Celtics and the Cavs twice last week), leapfrogging them in the standings to grab the fifth seed.

They will enter the TD Garden on Wednesday night without Matthew Dellavedova, Giannis Antetokounmpo, Khris Middleton and Tony Snell, who did not travel with the rest of the team to Boston.

LeBron James will not play when the Cavaliers take on the Raptors at home, due to a 'calf strain.' Cleveland is 0-7 this season when Bron-Bron does not suit up. The NBA champs can still claim the best record in the East if they beat the Raptors and Boston losses to the short-handed Bucks on 'Fan Appreciation Night.'

Meanwhile here are the teams the Celtics could potentially face in the first round of the NBA Playoffs this weekend and their season record:

The Celtics will not only have a chance to go into the postseason as the No. 1 seed, but they also have the best odds of landing the No. 1 draft pick in next month's lottery. That would be a first in league history if both were to happen since the inception of the draft lottery in 1990.

So what is the feeling in the locker room, especially after the C's last regular season practice on Tuesday with the best record in the conferance on the line despite not being a favorite to make a deep playoff run?

"These are the playoffs that I've looked forward to the most probably since I've been in this league," said Al Hoford, who the Celtics signed as afree-agent last summer. "Why is that? I feel very strong about this group. I think we have a special group. I can't wait for us to get started." [ESPNBoston]

It's would be a great accomplishment for the Celtics to clinch the top seed in the East, but they're not that naive and know that the Cavaliers are still the team to beat regardless of seeding.


"People are always going to rely on experience," Horford explained. "Cleveland's done it for so many years — I should say LeBron has done it for so many years — that that's just the way it is. So why would you bet against that? For us, we're not going to get caught in that. We're going to keep working as a group and keep getting better and see what we can do. I feel really good about our team." [ESPNBoston]

After suffering the worst loss of the season to the Cavaliers nearly a week ago, the Celtics looked dead in the water, but with this second chance of possibly rewarding themselves and becoming the best team in the East record-wise, would mean a lot and they don't care what anyone else has to say about it as the postseason is just days away.


"I mean, we are, so it doesn't matter what people think." said Avery Bradley after practice in Waltham. "We're the No. 1 seed right now and it's our job to make sure we take care of business tomorrow." [ESPNBoston]

The Celtics regular season finale tips-off at the Garden on Wednesday night at 8 PM.