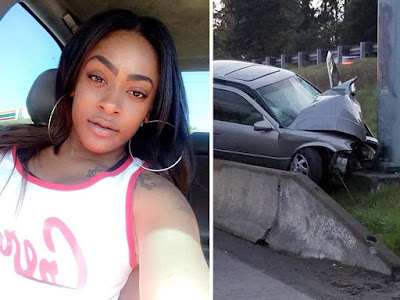 The sister of Celtics All-Star Isaiah Thomas was killed in a one-car accident early Saturday morning, according to the Tacoma News Tribune.

Chyna J. Thomas, 22, died at the scene after her car drifted off the shoulder of Interstate 5 in the Federal Way. The crash happened around 5 AM as she was heading southbound, according to Washington State Patrol.

Witnesses say that the car, a 1998 Toyota Camry, was driving normally at first before the car traveled about 50 feet off the roadway until it hit a Jersey barrier.


"All of sudden it started to drift very casually onto the left shoulder," State Patrol spokesman Trooper Nick King said. "That vaulted the vehicle head-on into the sign post." [Tacoma News Tribune]

The car came to rest on top of the barrier and against a metal pole. State Patrol reports Chyna Thomas was not wearing her seat belt, she died on the scene.

According to ESPN's Jeff Goodman, Thomas is expected to play when Boston opens up their first-round playoff series against the Chicago Bulls on Sunday night at the TD Garden.

The Celtics released a prepared statement via team officials:


"We are terribly saddened by the tragic loss of Chyna Thomas. The thoughts and prayers of the entire Celtics organization are with Isaiah and his family." [ESPN]

Mark Murphy of the Boston Herald, reports that Isaiah Thomas is 'in shock' and Brad Stevens is currently with him Saturday evening at his home. A decision to play or not has not been made, and it could take until game time before anyone knows for sure

Adam Himmelsbach of the Boston Globe, has reported that some close to Thomas are on their way to Boston to be with Thomas by Sunday morning.


Some in Isaiah Thomas's inner circle are headed to Boston in the morning to be here with him.
— Adam Himmelsbach (@AdamHimmelsbach) April 15, 2017

Adam Silver and the NBA released a statement and sent out their condolences via Twitter:

The Bulls mourn the tragic passing of Chyna Thomas and send our deepest sympathies to Isaiah Thomas and his family at this difficult time. https://t.co/t2FqHtNXTK
— Chicago Bulls (@chicagobulls) April 16, 2017


News of Chyna Thomas' death was first reported by KIRO 7 in Washington.