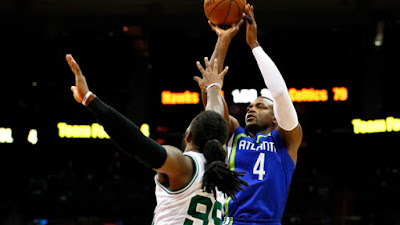 After a blowout loss to the Cavaliers, the Celtics brought the same lethargic defensive effort with them to Atlanta. Only this time, the Celtics came close to completing a 20-point comeback but came up short in the final minute of a 123-116 loss.

For the second straight night, the Celtics struggled defensively in the second quarter and allowed the Hawks to grab a 16-point lead at the half, 20 (83-63) by the 7:31 mark of the third quarter. From there, the Celtics put together their best quarter of night -- capped off by a 12-3 run that trimmed their deficit down to 10 just before the start of the final frame.

Led by Marcus Smart -- who was phenomenal on both ends of the floor and a key catalyst in nearly completing an epic resurgence -- the Celtics pulled to within five with 55 seconds left. Smart's effort on defense towards the end of the third quarter led to Hawks turnovers and offensively his outside shooting (5-of-9) helped chip away Atlanta's big lead.

Isaiah Thomas' game-high 35 points certainly kept the C's afloat throughout their comeback, however, Smart's 18 points, 6 steals and 7 assists put the Celtics in position to tie the game late in the fourth quarter. Jae Crowder (24 points) had a great shooting night on 9-of-14 attempts, including 4-of-7 from deep but it wasn't enough to stop the bleeding defensively as the Hawks were on fire throughout the night.

Avery Bradley, who missed a handful of open looks from behind the arc (1-of-8), found his offense via backdoor cuts and layups and poured in 17 points.

Brad Stevens called a 20-second timeout that led to Thomas missing two back-to-back 3-pointers that would have pulled the Celtics within two points before Hardaway Jr. completed a 3-point play that made it a three-possession game. After the Hawks missed two consecutive attempts and committed a turnover, it was only a matter of time before they were going to find a way to score while the Celtics failed to cash in on two opportunities to pull themselves to within two points.

With the win, the Hawks are now fifth in the Eastern Conference while the Celtics will seek their 51st win of the season against the Hornets in Charlotte on Saturday.