Marcus Smart responds to Jimmy Butler questioning his toughness: 'I laugh at that' 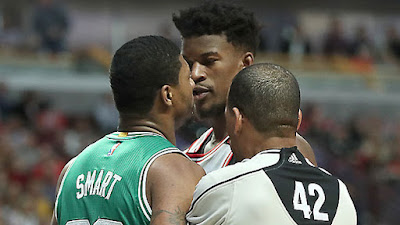 For the first time since Jimmy Butler labeled him an "actor," Marcus Smart spoke to the media Tuesday.

Of course the first line of questioning had everything to do with what Butler said on Sunday -- when he questioned Smart's toughness after the two got into a brief scuffle in Game 4.

Smart downplayed Butler's comments, saying he "laughed" at what Butler said about him. Smart also went on to say that he doesn't need to explain his toughness and added that he will let his actions speak louder than his words.


"I laugh at that. This is about Celtics vs. Bulls, not Marcus vs. Jimmy," Smart said. "I ain't gotta sit here and say this and that, I'm this, I'm that. I ain't that type of guy. My actions speak harder than words. It ain't hard to find me. So. But right now I'm focused on my teammates and this series."

Butler said on Sunday that Smart is good at "acting tough," and that Smart "isn't about that life."

So, Smart, are you about that life?


"I ain't gotta talk about what I am about," Smart said. "I could show you, but I'm not going to tell you. So, like I said, it ain't hard to find me. And you heard him, he said 'I don't think Marcus Smart's about that life.' Last time I checked, if you're going to say somebody ain't about that life, you should know, right?"

Smart answered, "never" when he was asked if his toughness has ever been questioned before, and laughed. Wednesday's Game 5 should be an entertaining one, especially when Smart checks into the game to guard Butler, his defensive assignment in the back court.