Back to Basics: Why the Celtics are struggling & what can be done to reverse it 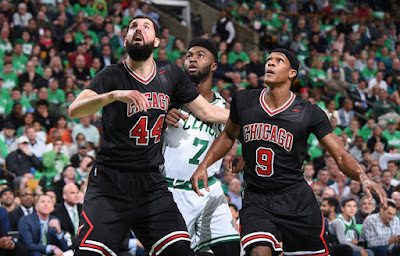 Through two games, it’s been a one sided affair to say the least. The Celtics now stand just two games shy of a third consecutive exit from the first round of the Eastern Conference Playoffs, causing many to wonder if the national media was correct in predicting an early fall from grace for Boston in this postseason.

While things may look bleak at the moment, I would caution the nay-sayers. The Celtics can still control its future with some slight modifications and adjustments in their series versus the Chicago Bulls.

Here’s what’s going wrong and how Brad Stevens and the Celtics can combat it:

Problem:
It’s no surprise or debate that Boston’s struggles on the boards have been a major culprit in their demise this series. The Celtics' inability to contain Robin Lopez, Jimmy Butler, and rest of the Bulls on the offensive glass has been key to Chicago being able to find additional possessions and shot attempts that have been killing Boston all series. While the C's are not a great rebounding team (using the regular season as a baseline), the margin has been as bad as it has been all season and it has been an Achilles heal to say the least.

Solution:
Boston won’t become a good rebounding team overnight. Unfortunately, the Celtics don’t have the proper personnel to simply 'try new rotations' and figure the problem out. Boston does need to up the intensity and physical play on the glass (primarily Al Horford, Amir Johnson, Jae Crowder, Avery Bradley, and Marcus Smart) and send several players to the glass to combat the Bulls' offensive rebounding efforts. Along with more bodies and a desire to bring down the ball, Boston needs to be creating more turnovers and 'empty possessions' for Chicago.

Boston may not be able to win the game on the boards but creating a favorable turnover number and forcing more difficult shots on the perimeter would help bridge the gap in a different way. The Celtics are at their best when they are playing physical and fast, neither are happening consistently right now and it is showing with the highlight of their rebounding deficiencies.

Problem:
Heading into the series, many believed this might be a last hurrah for Rajon Rondo and Dwayne Wade as backcourt mates in Chicago because of how poorly this season went for the Bulls. Instead, we have been seeing vintage Rondo and a much improved version of Wade for the last two games with two losses for the Celtics to show for it. Rondo’s ability to beat Isaiah Thomas off the dribble has led to a nightmare for the rest of the team's defense or has led to opportunities for Rondo to get into dangerous areas of the floor where he can make easy buckets or dish for easy layups and dunks.

Wade on the other hand has been mostly contained but is hitting open shots and making the open opportunities when afforded. Both players having success has opened the floor for others like Robin Lopez under the basket and Bobby Portis (Game 1), Nikola Mirotic (Game 2) on the perimeter for open looks that have been falling easily for Chicago through two games.

Solution:
Boston's ability to turn up the defensive pressure and intensity will be key to forcing the Bulls' older guards to run the floor and play both ends. The Celtics perimeter core of Jae Crowder, Avery Bradley, and Marcus Smart are pivotal to starting the pressure and creating uncomfortable handling of the ball for Wade, Rondo, and Jimmy Butler. It’s no small task but if Boston can't pressure the ball defensively on a more consistent basis, they will end up losing the series.

Problem:
Brad Stevens' offensive playbook is one of genius, the problem is when he's asked to go outside his comfort zone to find buckets. The Celtics will likely have a good shooting night or two before the end of this series but it is being proven that they will need a few more tricks in order to regain control of this series.

Solution
The Celtics do utilize the pick-and-roll from time to time but in the playoffs they are either unable to initiate the offense with Thomas off the ball or settling for quick 3's that aren’t falling. Boston should be looking to get Thomas running off Al Horford to allow the team's two most talented offensive players more structured looks at the basket in areas of the court that they prefer. Horford has been active in the series so far but the inability to find him in the open court has limited his effectiveness and in-turn allows Chicago to zone in on Thomas when he drives to the basket.

The pick-and-roll will pull the basket protectors out from under the hoop to allow Thomas a better brand of shot when driving and will also allow him to be the playmaker in getting Horford more shots either rolling to the hole or popping up for good open threes. Lastly, Rondo’s defensive tactics tend to lead to fouls when defending his man with the ball. Getting him in early foul trouble would be an added bonus.

The beauty of the NBA playoffs is every series is a best-of-seven. This allows Boston time to regroup and give it a shot to get back into this series with a pair of games in Chicago. Expect Boston to come out with an aggressive game plan that brings the series back to the TD Garden before it’s all said and done…