Kevin Garnett reveals details about his message to the Celtics 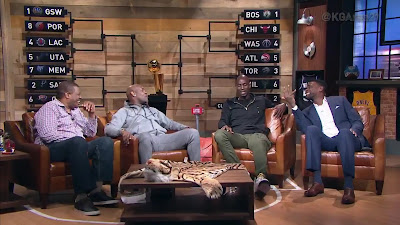 Once a Celtic, always a Celtic, especially if you're name is Kevin Garnett. That wasn't more evident than last week when 'The Big Ticket' left an inspirational message for the Celtics prior to their Game 3 win in Chicago last week


"I feel like there's a special place in my heart when it comes to the Celtics," Garnett explained. "I'm a player first, that's what my badge is."

KG, along with his guests of former NBA All-Stars Bernard King, Gary Payton and Chris Webber were all dying to know what was said on this message.


"I'll keep it private, because it was for [Isaiah]," Garnett continued. "I just reminded them that they're Celtics and remember why they're playing. His sister is an inspiration. And play for her. He took it and put it on the boom box and it is what it is. We all are C’s and that’s what it is."

In the wake of the the death of Chyna Thomas, it's been tough for Isaiah Thomas. But his Celtics family needed a reminder that the best way to be there for their leader is to play inspired basketball.

Who better than to preach that than someone like Kevin Garnett?

The Celtics resume their series, which is tied 2-2, on Wednesday night against the Bulls at the TD Garden.