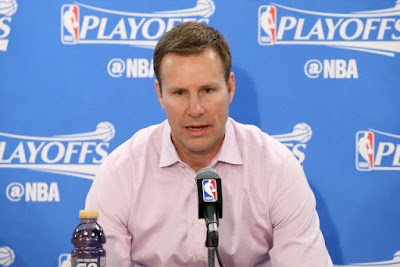 After witnessing Isaiah Thomas score 33 points for the second time in four games, Bulls head coach Fred Hoiberg expressed his frustration after Game 4 by claiming the Celtics All-Star point guard has been getting away a dribble violation.

Hoiberg says Thomas has been carrying the ball throughout their best-of-7 series and believes NBA officials need to start calling it.

In his postgame presser, Hoiberg stated the following.

The Bulls head coach said he's brought it to the officials' attention but has yet to see Thomas whistled for carrying. Hoiberg was asked if he thinks carrying the ball is typically called by NBA officials.


"It's not my place to worry about what somebody else is saying. I'm not putting a lot of weight into that," Stevens said. "There's a reason why the best scorers are really hard to guard. In Isaiah's case, it's not any different than some of the other better scorers. He's got a tremendously high skill level, tremendous change-of-pace. He's just a hard guy to guard, he's a hard guy to keep in front of." [ESPN Boston]

Stevens was later asked if he would ever express himself about another player the way Hoiberg did on Sunday.


"I'm not going to say what I would or wouldn't do with regard to what somebody chooses to say," Stevens explained. "Anytime you're in front of the podium you have the right to say whatever you want to say, but ultimately I'm not putting a lot of weight into that. I think Isaiah's one of the best scorers in the league. Like the other really good scorers, he's hard to guard because of his skill, his change of pace and his explosion. If you go through the guys in the league that are the hardest to guard, there's a reason they're hard to guard.

"I think highly of Coach Hoiberg. I've known him for a long time. Whatever he wants to say is his prerogative, and I'm focusing on our team and coaching our team."

When members of the Bulls were asked about Hoiberg's claims, no one seemed eager to back them up. Jimmy Butler says it's not his job to watch how Thomas dribbles the ball and while Dwyane Wade thanked his head coach for sticking up for his team, he simply stated "I'm not getting into the officiating" when asked about his thoughts on what Hoiberg said about Thomas.

It will be interesting to see if the NBA will either address Hoiberg's comments or simply slap his wrist with a fine before Game 5. Either way, Thomas will certainly be under the microscope on Wednesday by NBA officials and of course, the national media.