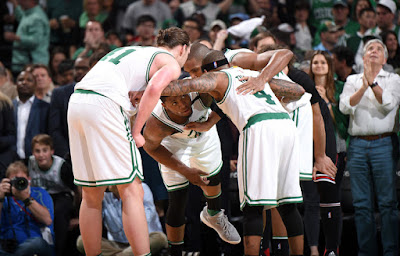 Another group effort, another big fourth quarter performance from Isaiah Thomas and another critical win for the Celtics.

The Celtics topped the Bulls for the third straight game in their best-of-seven series -- 108-97 -- grabbing a commanding 3-2 lead and have pushed Chicago to the brink of elimination.

Avery Bradley and Al Horford were instrumental for the C's, setting the stage for Thomas to put their opponent away in the fourth quarter, like he has so many times this year. Bradley only needed three quarters to score 24 points and Horford made hustle plays on both ends of the floor.

Celtics made key stops in the fourth quarter and grabbed the momentum they needed to finish the job. Horford checked in four minutes into the final frame, pulled down rebounds that led to key possessions and scored back-to-back shots, including a three-point play.

The Celtics trio combined for 69 points -- Thomas and Bradley both scored 24 points and Horford finished with 21 points, 9 assists and 7 rebounds.

In what was their quickest start of the series, the Bulls grabbed a 12-4 lead before the Celtics responded with a 19-8 run -- giving them a three point lead (23-20) heading into the second quarter. Chicago then slowed their offense down and began seeking high-percentage shots.

That led to the Bulls making trips to the free-throw line but it felt like in one of three possessions, the Celtics would force a turnover that would then jump start their fast break where they finished strong. And whenever the Bulls pulled back, the Celtics hit an array of 3-pointers that kept them ahead in brief spurts.

At halftime, the Celtics had already attempted 25 3-pointers but only made six of them. Meanwhile, the Bulls went 8-of-11 from the charity stripe and shot 52.8 percent through two quarters and only trailed the C's, 52-50 at the half.

But without the play of Avery Bradley, it could have been a long night for the C's. Through three quarters, Bradley went 11-of-17 and kept their offense alive while the Bulls shot 50 percent throughout night.

Jonas Jerebko slammed one down at the beginning of the fourth quarter, which was followed by an acrobatic one-handed three-point play layup by Thomas to get the crowd up and going but the Bulls wouldn't go away.

After Horford checked in, the Celtics turned it up a notch. Putting in the effort on both ends until Thomas caught fire and slammed the door on the Bulls' chances of making a comeback. Both guys led a 25-8 game-defining run that gave the Celtics a double-digit lead in the final minutes of the game.

The Celtics now have a chance to end the series on Friday -- when they will head to Chicago for Game 6.