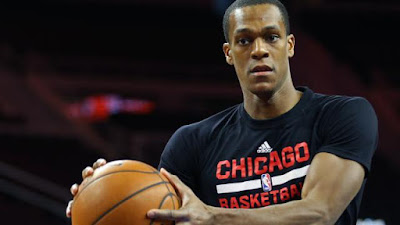 On Thursday, the Bulls ruled out Rajon Rondo for Game 6 against the Celtics, as he continues to recover from a fractured right thumb and torn ligaments in his right wrist.

Fred Hoiberg, who has been talked about quite a bit over the last 24-hours, says it's doubtful that Rondo would play in a potential Game 7, if the Bulls were to force one back at the TD Garden.


"Nothing's changed as of now," Hoiberg said during a conference call Thursday. "We had a film session in the hotel this morning. Obviously we didn't do anything on the court before we left. Rajon, most likely, will come in and work out tonight, but like we talked about [Wednesday] at the game, it's still a long shot that he's back on the court, at least in this series." [ESPN]

According to Rondo, the reason his hand was put in a cast was due to an undisclosed ligament tear that he had been dealing with for some time. Initially when he injured his thumb, it was speculated he would miss a couple of weeks, but by Monday the point guard showed up to practice with a soft cast instead of a hard one.

Before Game 5, it was highly-speculated that Rondo could be healthy enough to play after he held a private practice session on Tuesday night in Boston, but by Wednesday an X-ray revealed the fracture had not yet healed.

Speaking of injuries for the Bulls, Jimmy Butler has been dealing with knee soreness which was also brought up by Hoiberg. Butler, who missed his only two shot attempts in the fourth quarter of Chicago's Game 5 loss, brushed-off any questions about his left knee, while it was attached to a e-stim (electrical muscle stimulation) machine near his locker.


"He's got some soreness, there's no denying that," Hoiberg said. "Jimmy's a warrior, he's fighting through it. He's going to continue to do so, he's going to get treatment around the clock. He's done a great job of being diligent with his treatments. Jimmy did have the ball in his hands some in that fourth quarter. We did run a couple actions for him as well as using him as a facilitator. But obviously the ball was in Dwyane [Wade]'s hands a lot as well. He'll get treatment tonight a couple times, he'll get it again tomorrow, before and after shootaround, before the game. And hopefully we'll be good to go once 7 o'clock rolls around." [ESPN]

In the meantime, Hoiberg will start Isaiah Canaan on Friday at point guard again, despite playing very little in the second half of the regular season and seen in street clothes through the first three games of this series, he has provided some offense when called upon in Games 4 and 5.

Canaan finished with 13 points and no assists, while playing 36 minutes in Wednesday's loss.


"Obviously the dynamic of our team has changed with Rajon out," Hoiberg said. "We played quite a few stretches last night, really the majority of the game without a true point guard on the floor. But that's just the reality of the situation we're in right now. And it's probably going to be that way for the rest of the series. We're still confident at 3-2. Three series are in the same situation. Teams going home and hopefully holding serve and forcing this to a Game 7, where anything can happen." [ESPN]