Brad Stevens on the status of Isaiah Thomas: 'I think his intention is to play' 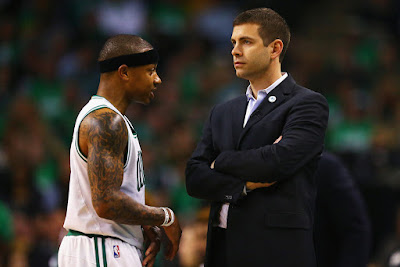 Instead of talking x's and o's and his game plan for the Bulls, Celtics coach Brad Stevens spent time before Game 1 updating the media on the status of Isaiah Thomas.

In the wake of the tragic passing of Thomas' sister Chyna J. Thomas, Stevens couldn't confirm if Thomas will play in the opening matchup of the Celtics' seven-game series against the Bulls but did say Thomas' initial intention is to take the floor.


"He went through our shootaround. He's struggling," Stevens said. "Obviously it's tragic circumstances that he and his family are going through right now. Our thoughts are first and foremost with all of them. I think his intention is to play. We talked a little bit last night and then again today. As he goes through it and feels like he needs to not [play] then that's whatever he wants. One of the things that I've learned having been through situations in the past is that there's really no right or wrong answer -- it's whatever's right for him. That's what we've encouraged him. He's really hurting. It's a tough situation."

Stevens said every member of the Celtics team has reached out to Thomas within the past 24 hours and spent time talking about Thomas' character and what he means to the team.


"Everybody reached out, it's a close-knit team, he's a big part of it" Stevens said. "Isaiah is a great teammate, Isaiah's a great husband, he's a great father. He is a great guy, great son and brother and I think ultimately we just all tried to do our part and let him know we're thinking about him. Anything that we can all do to help; we do. We're family and this particular situation with his family takes precedent over everything else going on and we're here for him if he needs us."

How do you keep your team engaged and focused on facing the Bulls?


"I don't think there's an easy answer to that. The game will play itself out the way the game plays itself out," Stevens said. "Our guys have spent all week preparing really hard, and are really excited for a chance to play in the playoffs and at the same time obviously more important things happen in life. I don't think my job necessarily is to separate the two -- my job is to be there with the rest of the guys to support Isaiah."

Lastly, Stevens reiterated the importance of seeing his team rally together to show their support for Thomas through this tough time and to be great teammates by going out and competing at a high level in Game 1.


"In our role, we're gonna all do our job as well as we possibly can -- first and foremost and we're going to be supportive," Stevens said. "Part of being supportive for him is putting our best foot forward and letting him know that whatever his emotions are at that time, it's OK to let them out. I don't know if there's a script for this, I don't know if there's a script for the emotions that somebody is suppose to show. I think that ultimately however you feel, is the way you feel. We're here as a support, part of our support is to be great teammates and great teammates get ready to compete together and compete for each other."