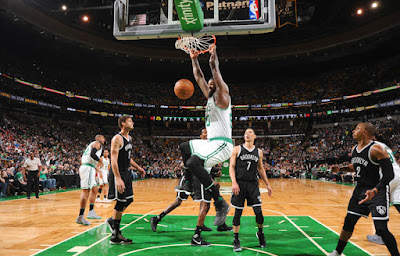 The Celtics are one win away from entering the postseason as the No. 1 seed in the Eastern Conference.

After Boston cruised to a 114-105 win over the Nets, the Heat did their part in beating the Cavaliers in overtime -- giving the Celtics a one-game lead for first place in the East.

All the C's have to do now is beat the Bucks in Wednesday's regular season finale at TD Garden in order to clinch the top spot.

With the win, the Heat -- who are now tied with the Bulls for eighth -- kept their playoff hopes alive while the Cavaliers not only need to beat the Raptors on Wednesday but also need the Celtics to lose in order to regain the No. 1 seed.

Celtics ended the first quarter with a 15-point lead (28-13) and held a double-digit lead throughout most of the first half. Celtics kicked off the third quarter with an 11-0 run to give them a 27-point lead -- their largest one of the night.

The Nets responded with a 12-0 run before the start of the final frame and pulled to within 11 points. Jeremy Lin led with a double-double (26 points, 12 rebounds) and Brook Lopez added 25 points.

With Lin converting at the free-throw line and Lopez knocking in jumpers, Brooklyn pulled to within seven points with under five minutes left. Horford outscored the Nets 6-2 before Thomas drained a 3-pointer to top a 9-2 Celtics run that pushed Boston's lead back up to double-digits (107-97).

The Nets never led once.

Boston (52-29) now has a chance to grab the conference's best record, and have home court advantage throughout the playoffs. It will be the first time the Celtics have entered the postseason as the No. 1 seed since the 2007-2008 season -- same year the C's clinched an NBA title.