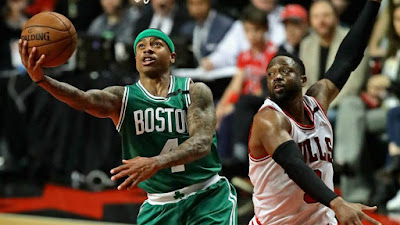 The Celtics have stolen home court advantage away from the Bulls, and are now in control of their best-of-7 series.

With plenty of help from Gerald Green, who put on the playoff performance of his career, Isaiah Thomas led the Celtics to their second win of the postseason, 104-95.

The C's have knotted things up at two game apiece as the series will shift back to Boston for Game 5 on Wednesday.

For the first time since Game 1, Thomas scored over 30 points in a battle between him and Jimmy Butler (33 points), and led his team to victory -- much like he's done all season long. His 33 points along with his five assists, led five Celtics players in double figures as he poured it on the Bulls in the second half by driving past defenders and finishing strong at the rim.

In his second consecutive start, Green immediately made his presence felt -- scoring eight points in the opening seven minutes en route to a 16-point half. He finished the opening half 4-for-7 from deep and helped spark a quick 22-10 first-quarter Celtics lead.

It marked the third straight game this series in which the C's grabbed a double-digit lead in the opening minutes. The Celtics eventually grabbed a 20-point lead in the second quarter -- one that dwindled to 11 at the break -- before the Bulls opened the half with a 19-6 run and with 4:35 left in the third quarter, grabbing their first lead of the night (65-63).

Led by Butler, who tied Thomas' game-high 33 points, the Bulls erased a 20-point deficit for the first time this series but their lead was short-lived. Celtics retaliated with a 12-0 run and teetered between holding a double-digit lead until the final buzzer.

After a poor shooting night from behind the arc (1-of-9), Thomas attacked the paint where he finished went 6-of-8 in the second half and made 12-of-13 from the charity stripe. Green finished with 18 points and seven boards, Al Horford posted a double-double (15 points, 12 rebounds), Jae Crowder scored 11 points on 5-of-9 attempts and Kelly Olynyk led the bench with 10 points.

In trying to find an offensive spark in his back court by anyone not named Dwyane Wade, Bulls head coach Fred Hoiberg turned to Isaiah Canaan off the bench. Canaan, who wasn't on Chicago's active roster before Sunday, turned in 13 points and 3 assists.

Jerian Grant and Michael Carter-Williams combined for zero points and two assists in 12:48 in the first half before Hoiberg benched them for the night. Aside from Butler's 33 points, Wade finished with a modest 11 points on 5-of-12 shots and Nikola Mirotic chipped in 13 points and 7 rebounds.

The Celtics will look to grab a 3-2 lead on Wednesday in a pivotal Game 5 at TD Garden.

For the first time this series, not only did the Celtics shoot better than 80 percent from the free-throw line (81.8), but they also got to the line 22 times. C's made 18-of-22 from the charity stripe and shot 46.3 percent from the floor.