Fred Hoiberg is giving Rajon Rondo the green light, and it's paying off 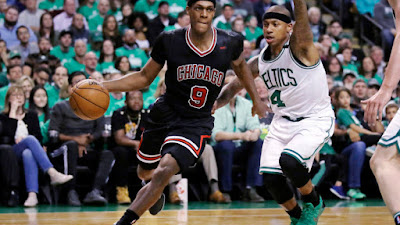 The 2016-17 season hasn't been the smoothest one for Rajon Rondo, Fred Hoiberg and the Chicago Bulls.

After being suspended for "conduct detrimental to the team" back in December and benched one month before the trading deadline, it looked like Rondo had already overstayed his welcome in the Windy City, only months into the regular season.

But eventually Rondo earned his way back into the starting lineup towards the end of the year, led his team in a playoff race, where they won seven of its final nine games of the season -- pushing them to earn the eighth and final spot in the east.

Now, all is forgiven. The Bulls have a 2-0 lead against the Celtics in a best-of-seven series that will head to Chicago for Game 3, and Rondo's play is one of the biggest reasons why.

Hoiberg, in his first year coaching the Bulls, has now given Rondo the keys to run the team and with Jimmy Butler and Dwyane Wade -- playing some of their most inspiring basketball of the year -- to use at his disposal, the starting unit has flourished.


"Rajon has been unbelievable this year," Hoiberg said. "He's obviously been in some situations that he probably hasn't been his entire career, and he's handled it very well."

While Butler and Wade combined for 44 points in Tuesday's 111-97 win over the Celtics, Rondo was the mastermind -- dishing out 14 assists to go with his 11 points and snatching a game-high 5 steals to go with his 9 rebounds. He meticulously dissected the Celtics' defense and got his teammates involved as six Bulls players scored in double figures, including all of their starters.

At this point, Rondo's checkered past in Chicago is water under the bridge. Bulls head coach didn't hold back in saying what Rondo means to his team, stating the veteran point guard not only calls the shots throughout the game but also has a future in becoming a coach one day when he ultimately retires.


"He's obviously a coach out on the floor," Hoiberg said. "And I think he's going to be terrific when he hangs them up in that role as well as a coach. He's been great to deal with, he's been great with me, and hopefully with his playoff experience, he'll help us go on a run."

In the beginning, Hoiberg resisted at the thought of giving Rondo full control of his team and the two clashed. And after Butler and Wade called out their teammates in late January, it felt like the Bulls were on the verge of imploding.

By mid-March, Chicago found themselves on the outside looking in of the playoff picture and when it appeared that Wade (elbow) was going to shut himself down for the regular season, Rondo took advantage of the opportunity and led the Bulls to a playoff berth. Now with things looking up, Hoiberg has no choice but to stick with Rondo while Wade, Butler and the rest of Chicago's supporting cast rally behind him.

After Game 2, Wade showered his starting point guard with praise -- reminiscing on the days when he was on the other side of Rondo's brilliance, facing him as a member of the Heat and how Rondo's influence on the Bulls has paid dividends.


"Hated him, hated him, as a competitor," Wade said. "That hated hated him is that respect. We played against Boston back in the day, Rondo knew all the plays. He messed up your first option. He knows your second option. We were just good enough to have a third option. He was that good. I think it helps me and JImmy to have someone so locked in.

Fred gives us a voice and Rondo gives us another voice. He's so locked in. We know we can go to him and ask him anything. He's watching film all the time. So, it's key when you have a point guard like him that controls the whole game. You just have to play. Tonight, our job was easy. We just had to play. As I told him, way to run your team. He did an amazing job."

With Chicago on the verge of grabbing a commanding 3-0 lead, Brad Stevens and the Celtics are quickly running out of time to come up with a new plan to counter the Rondo-led Bulls. The pressure is on Boston -- a team that would be the first No. 1 seed in ten years to lose to an eight seed in the opening round of the NBA playoffs.