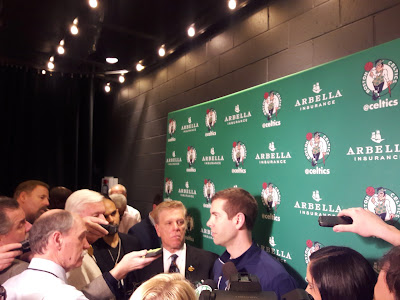 For most, Wednesday's showdown between the Celtics and Cavaliers is considered as the most important games of the regular season for Boston.

But for Celtics coach Brad Stevens, this battle for the top seed in the Eastern Conference is just another game.

With Avery Bradley and Jae Crowder both expected to start, Stevens' starting five will be at full strength against the champion Cavaliers. But according to Stevens, preparation for taking on the champs is no different than any other opponent.


"We don't talk big game/small game, we talk about the next game and trying to do the best that we can against our opponent," Stevens said. "I know that sounds really boring but that's the way I look at it -- the way I go about it. These have all grown up playing big games their whole lives."

After some speculation of whether coach Ty Lue would rest his guys, the Cavaliers are expected to start all of their big three members in LeBron James, Kyrie Irving and Kevin Love. However, Stevens says Cleveland's second unit --  which has been plagued by injuries since the All-Star break -- is often overlooked.


"Those guys are great players," Stevens said. "When you add them [role players] and we beat them [but] no one talks about it but when we beat them they didn't have [J.R.] Smith. They're going to continue to round in form as those guys are back playing together and now their getting fully healthier with Korver back and everyone else; it's a really tough team to play against. Tristian Thompson certainly is a unique player that does a lot of unique things. But now they become really stretched out with him out of the game as far as they can put five shooters in the game and you have to dart out 30 feet on every possession, which is really tough. So, they challenge you in so many different ways. They're so versatile in how many different ways they can play and that's mostly due to the fact that they got a guy 6'8, 260, can play all five positions."

Having Crowder back definitely helps.


"I just think Jae's really important in general because he allows us what we just talked about with Cleveland," Stevens explained. "Cleveland is -- obviously Golden State, maybe a couple of others -- the best at being able to play a bunch of different ways and Jae allows us to play different ways because of his ability to play both the 3 and swing to the 4."

When asked about the possibility of resting his guys before the start of the postseason, Stevens said he's given it very little thought but will continue to check in with his medical staff and make sure his team is at full strength come playoff time.