Celtics Pregame: Isaiah Thomas plans on heading to Seattle after Game 2, will meet team in Chicago on Friday 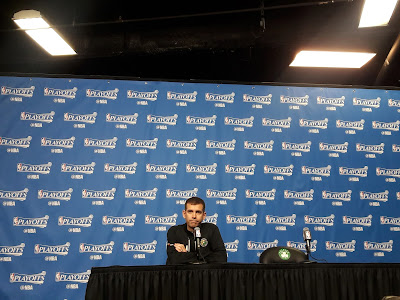 According to Brad Stevens, Isaiah Thomas still plans on heading to Seattle immediately after Game 2 to be with his family as they continue to mourn the death of his younger sister, Chyna Thomas.

Stevens updated the media before Tuesday night's game against the Bulls -- stating that Thomas will definitely play and rejoin the team in Chicago for Game 3.

Still no word on any funeral plans for Chyna Thomas, Stevens says he will wait for that information before moving forward with any plans.


"From everything I've been told, there's still aren't any final plans on the services and everything else so once we get information on that, we'll obviously have to make those decisions on our schedule and everything else. But we would hope to, for sure, at least make that available to everybody. Those plans have no been finalized. Isaiah's just going back [by himself] to be with his family.

"Bottom line, it's quiet. Everybody really feels for the guy. We're together all the time. It's a great group of guys. We realize that we have a job to do and we have to prepare to do our job as well as we can. But at the same time, there's a strong relationship there."

Isaiah Thomas and the Celtics will look to tie up the series on Tuesday night before traveling to Chicago and taking on the Bulls in Game 3 on Friday.