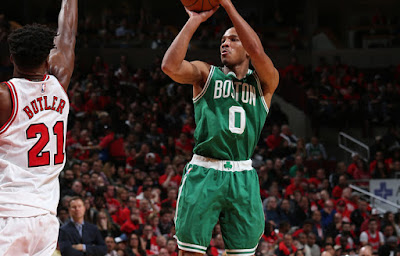 Only three teams in NBA history have comeback to win a playoff series after losing the first two games at home, the 1969 Lakers, 1994 Rockets and the 2017 Celtics.

The C's dusted the Bulls, 105-83, in Game 6 on Friday night in Chicago, beating their opponent for the fourth straight game and winning their best-of-7 series, 3-2.

With the win, Celtics coach Brad Stevens won his first career NBA playoffs series and will begin to prep his team for the Eastern Conference semifinals against the Washington Wizards. The Celtics impressively outmatched the Bulls throughout the night -- they firmly held onto a comfortable lead and cruised to a lopsided victory thanks to a whopping 30-13 third-quarter run that put the game out of reach for good.

All five Celtics starters scored in double figures as they shot 48.8 percent from the floor, including 41 percent from deep -- where they drained 16-of-39 3-pointers. Avery Bradley led with 23 points on 9-of-12 shots, Gerald Green got off to another quick start en route to 16 points while Jae Crowder, Isaiah Thomas and Al Horford (5-of-5) all added a dozen points.

In what has become a bit of a pattern throughout the opening round, Boston got off to another quick start -- grabbing a 21-11 lead. The Bulls made a couple of small runs in the second quarter but by halftime, the Celtics led, 54-41.

After the break is when the Celtics put together the biggest run of the series. Boston's 30-13 run was riddled with 3-point shooting, defensive stops and domination as the Bulls couldn't find any offensive rhythm to counter.

Jimmy Butler's 23 points led the Bulls but Robin Lopez' measly 10 points was good enough to make him the second-leading scorer for Chicago. Dwyane Wade did his best disappearing act of the series -- scoring two points on 1-of-10 attempts and Isaiah Canaan poured in nine points in 25 minutes.

Now, the C's will focus their attention on the Wizards -- a team that turned into a rival throughout the regular season when Wizards guards John Wall and Bradley Beal got into Crowder and Marcus Smart's faces in more than one occasion. Both sides needed to be separated, the Celtics and Wizards split the season series, 2-2.

Game 1 of the Eastern Conference semifinals between the Celtics and the Wizards kicks off at 1:00 PM on Sunday at TD Garden.

The Celtics offense was rolling from start to finish against the Bulls. While shooting close to 50 percent, the C's scored 39 field goals on 28 assists.