Rajon Rondo holds a night practice, out for Game 5 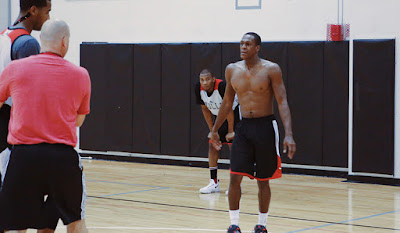 Rajon Rondo will not play in Game 5, despite reports of a clandestine workout Tuesday night in Boston. The veteran guard wanted to test out his injured right thumb and wrist to determine if he was healthy enough to return to the court for the Bulls in Wednesday's pivotal game against the Celtics, according to multiple sources.

ESPN first reported that Rondo scheduled the private evening practice session, 24-hours after removing his arm cast, in hopes of getting a better feel of his fractured his right thumb and on a possible comeback after missing the last two-games.


"He wants to play bad," said one source close to Rondo on Tuesday night. "As of right now, it's still tender and he's erring on the side of waiting until Game 6. But knowing him, could change his mind in the morning and try to play." [ESPN]

Rondo's decision on his availability for Game 5 was still up in the air on Wednesday morning, especially since he has switched from a hard cast to a soft splint and participated with his teammates in most of Tuesday's practice while protecting his injured wrist and hand.


"I don't want to hurt my teammates, go out and try to be a hero and be 65 percent," Rondo said on Wednesday. "I'm going to do what's best for my team right now and try to support from the sideline."

Rondo added, "My thumb is the same as it was last week. I think I'm Wolverine but I hasn't healed that quickly yet." [CSNNE.com]

A recent X-ray showed that the fracture of the thumb has not really healed on it's own and there's significant amount of swelling as well.

Bulls coach Fred Hoiberg ruled Rondo out for Game 5 on Tuesday afternoon, when he told reporters that his starting point guard could return at some point in this series. Rondo was seen earlier in the day putting up jump shots before the Bulls took practice.

Rondo suffered the injury in Chicago's Game 2 win and was expected to be in a cast for at least seven to 10 days. But after the Celtics evened the series 2-2 on Sunday, the Bulls guard showed up to practice on Monday without the cast on.

Hoiberg says Rondo's return is still a "long shot," but has acknowledged that the former All-Star is open to do anything to come back now that the Bulls have squandered a 2-0 lead


"This is honestly the first time he's touched a basketball with that right hand," Hoiberg said on Tuesday. "We'll see how it goes. He's going to continue to condition and do everything that he can...but if there's anybody that can do it, will try to fight through it, it's Rondo." [ESPN]

Rondo's potential return would be a mental spark for the Bulls, who will start Isaiah Canaan for the first time all season in Game 5, after the team looked lost in Games 3 and 4 at the point. Jerian Grant and Michael Carter Williams have combined for 6-of-28 shooting from the field in this series and in the last two games alone, committed nine turnovers.


"Obviously, that's huge," Jimmy Butler said of a possible Rondo return. "We want that guy back...He's our floor general out there. He knows everything. He knows every matchup, every position and he's still helping from the bench. We really want him helping out there from the floor." [ESPN]

Rondo averaged 11.5 points, 10 assists, 8.5 rebounds and 3.5 steals in Chicago's two victories at the TD Garden to open up the series.