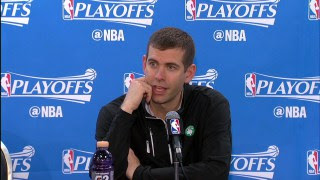 Isaiah Thomas has posted not one but two 30-plus point performances one week after the untimely death of his younger sister, Chyna Thomas and wielded his team to victory in a pivotal, momentum-turning game.

His Game 4 heroics may have saved the Celtics' season as they avoided a 3-1 hole and will head to Boston for Game 5 with the series tied, 2-2.


"I can't believe it," Stevens said after the Celtics' 104-95 win on Sunday. "I tried to say that earlier this week but what he's been through and the day-to-day, it's been unfathomable the way he's performed on the court. I mean, it's really incredible."

Thomas not only provided scoring but also found his teammates down the stretch when the Celtics went on a crucial fourth-quarter run. He finished with a team-high 33 points and seven assists.


"They're doing a really good job in trying to be physical with them and staying with him in pick-and-rolls and he has to make plays for others and he's done a good job of finding guys," Stevens explained. "Then he got that little stretch where he found seams for himself. As we continue to move the ball and make shots, that'll open opportunities for him. I thought a lot of guys played well but he certainly was huge in responding."

A comforting sign for the Celtics was certainly seeing Thomas' attitude back to how it was all season long. He was cheering for his teammates, engaging in trash talking against his defenders and a bounce to his step that we haven't seen since the regular season.

With everything Thomas has been dealing with, it's incredible to see him perform at such a high level. He's been the team's most valuable player and when he heads home to Boston for Game 5, Celtics fans may push him to even higher heights while his teammates continue to rally behind him and will look to take their first lead of their best-of-7 series against the Bulls.

Thomas is averaging 25.5 points, 6 assists and 4 rebounds while shooting 45 percent from the floor throughout the series.