Isaiah Thomas speaks with the media for the first time since the death of his sister, responds to Fred Hoiberg 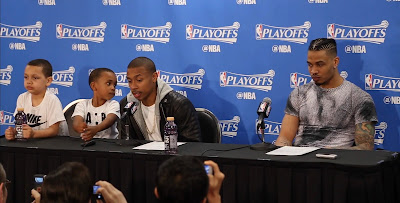 It has been just over a week since Isaiah Thomas received the worst news of his life, when he learned that his 22-year-old sister Chyna Thomas was killed in a one-car accident.

Those close to Thomas know that it hasn't been easy dealing with the pain of his little sister's death, but somehow the Celtics guard has managed to play some inspirational basketball in the first four games of the Eastern Conferance Playoffs thus far, including two 33-point performances.


"Mentally and emotionally I'm not here, " Thomas said after Game 4 as he spoke publicly for the first time since the passing of his sister. "So I just feed off of what the guys give me. They give me a lot of confidence. I can't do it without those guys. They believe in me. Being here is what makes me sane and makes me feel somewhat normal through these tough times."

Thomas finished with 33 points on 10-of-21 shooting and 7 assists, picking apart the Bulls defense every opportunity he saw fit in a 104-95 Game 4 win.

The Celtics have now tied the series 2-2 against Chicago and Thomas' 26 points (46-percent shooting), 6 assists per game average through four games is the biggest reason the C's are where they are after being down 0-2.

At a time where Thomas has been grieving, he has admitted that the support from his Celtics family, which included his coaches, the front-office, teammates and even the fans, is what has helped him through an emotionally-draining week.


"They've been really important", said Thomas. "They've been everything. This organization is the best organization there is, from the people who work at the Garden, the players, coaches, everybody who is a part of the Celtics, they have been supportive; the whole world has."

It was great to see Thomas smile during various moments of Game 4, we also got a smirk during his postgame presser, especially when asked about Fred Hoiberg and his claim that Thomas is 'impossible to guard' to due the refs allowing the Celtics guard to carry or discontinue his dribble every time he drove to the hoop.


"That' s not the reason why I am an impossible cover," Thomas said. "It is what it is. I don't know. I've been dribbling that way my whole life...Not one man can guard me. That's just the confidence I have."

That even got giggles from Thomas' sons James and Jaiden at the podium, while their dad tried to offer the best response to what seems like an outrage statement. Hoiberg has more to worry about when it comes to the Celtics and this series than how one dribbles.

Though this first-round matchup is far from over between the Bulls and Celtics, it's fair to say that Sunday was a great day for Thomas. God knows he needs more of those now than ever.


You can check out his full postgame comments below: