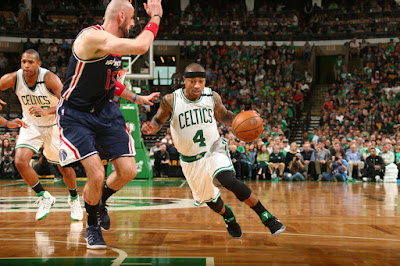 One down, three more to go.

The Celtics erased a 17-point first half deficit and topped the Wizards, 123-111 in Game 1 of the Eastern Conference semifinals.

Behind 33 points from grieving star Isaiah Thomas and another near triple-double from big man Al Hoford, the Celtics overcame a 16-0 deficit and blitzed the Wizards at a raucous TD Garden.

The Wizards wasted no time in sucking the life out of the TD Garden with a 16-0 run to open the game en route to a 20-3 lead. It took nearly four minutes for the Celtics to score their first points -- Thomas made free-throws to put his team on the board before having one of his front teeth knocked out.

He finished the quarter with 12 of the Celtics' 24 points while the Wizards tacked on 38. Kelly Olynyk was a spark off the bench with 10 points in the opening frame but it did little to extinguish Washington's sizzling offense.

However, the Celtics didn't need much time to erase the deficit. They kicked off the second quarter with a 16-4 run, tying the game at 42 with 7:41 left in the first half and by halftime only trailed the Wizards by five (64-59).

Jae Crowder's 3-pointer from the corner gave the Celtics their first lead of the night -- 73-71 -- with 6:54 left in the third quarter, starting a 16-4 run and swung the momentum into the hands of the Celtics. Thomas poured in 31 points before the final frame and bounced back from his poor outside shooting in the first round by draining 5-of-9 from behind the arc.

The Wizards scored only 16 points in the third quarter and faced a 15-point hole. Thomas scored 31 of his 33 points before the fourth quarter and led five Celtics in double figures.

From there it was a shootout, rookie Jaylen Brown, who hasn't seen meaningful minutes in four straight games, checked in with under six minutes left and made an immediate impact. He drained a corner 3-pointer on one possession and found Crowder (24 points, 6 3-pointers) behind the arc on the very next. Although Bradley Beal responded to both with a 3 of his own, Horford (21 points, 9 rebounds, 10 assists) made an open jumper, pushing the lead to 116-105.

With under two minutes left, the Celtics converted turnovers into 3-pointers and easy layups and cruised to victory. The Celtics will host the Wizards for Game 2 on Tuesday at TD Garden.

The Celtics once again made it rain from behind the arc. They made 19 of 39 3-pointers -- which was a catalyst in closing the door on the Wizards in the final minutes of game.