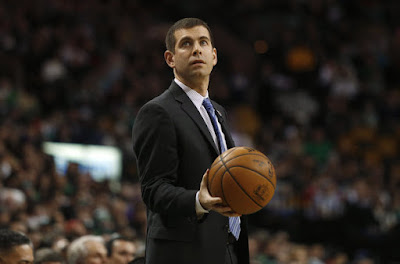 Don't expect to see Brad Stevens rest his guys in the final games of the regular season. Celtics head coach has no plans of sitting his players if they're healthy and it could pay dividends depending on what happens Monday.

With two games left, the Celtics (51-29) find themselves tied with the Cavaliers for the No. 1 seed in the Eastern Conference. After surrendering a 26-point fourth-quarter lead in a 126-125 overtime loss to the Hawks on Sunday, the Cavs are giving Boston another chance to grab the top playoff spot in the east.

A Celtics win and a loss by the Cavaliers at Miami will give Boston a one-game lead ahead of the Cleveland for first place. The Cavs have to beat the Heat in order to clinch No.1 but will have to do so without LeBron James and Kyrie Irving -- coach Tyronn Lue has decided to rest both guys -- and Tristian Thompson (thumb), who is out nursing a hand injury.

Meanwhile, the Heat (39-41), who are currently tied with the Bulls for the eighth and final playoff spot, are fighting to keep their playoff hopes alive. If the Heat knock off the Cavaliers while the C's top the Nets on Monday, the Celtics can decide their fate in Wednesday's season finale against the Bucks -- a win gives them first, a loss will lock Boston into second (CLE owns tiebreaker).

Although Stevens isn't going to rest up his guys before the postseason, he's also not up late at night, tossing and turning thinking about first place.


"The most important thing is tonight's game (against Brooklyn). That's the way I'm looking at it," Stevens said. "Whatever seed we get, we get. That'll be the result of an 82-game schedule, not the result of one or two games. It is what it is. We've had a pretty consistent year with regard to performance. We've also had moments where we haven't played as well. I'm literally not talking about it with the team nor am I losing one second of sleep over it."

Despite clinching the league's worst record of the season, the Nets enter Monday's game winners of four of their last five. Brooklyn has been playing the "spoiler" role lately, beating teams like the Hawks and Bulls, respectively -- two clubs lobbying for playoff position.

The Nets now will attempt to spoil the Celtics' final chance at locking in the No. 1 seed.