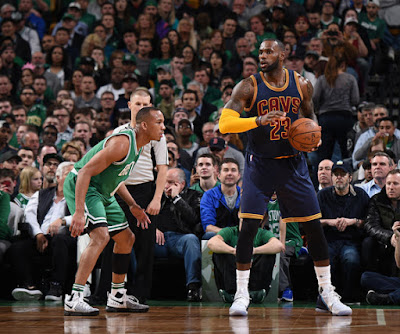 In a race for No. 1, the Cavaliers took an early lead, ran with it and left the Celtics in the dust.

Isaiah Thomas found his scoring touch early and often as he finished with a team-high 26 points but his teammates couldn't find their offense. Avery Bradley shot 1-for-8 as he continues to work his way back from being out (illness). Jae Crowder chipped in 13 points on 5-of-11 and Al Horford added 12 points but it was no match for Cleveland's explosive offense.

The Cavs went on a 22-4 run second-quarter run. Cleveland was in cruise control -- creating stops, finishing in the fast break and James caught fire. He finished the quarter with 15 points on 7-of-9 shots from the floor and pushed Cleveland to outscore the C's, 38-22 as they took a 15-point lead into the break (57-42).

And from there, the Cavs picked up right where they left off only this time it was a 24-12 run which gave them a 25-point advantage as James continued to pour it on alongside Irving and Love. All three combined for 20 of 30 Cavaliers points in the quarter.

Cleveland scored 90 points through three quarters while shooting 46.6 percent, while the Celtics went cold from the field (39 percent) and allowed 46 points in the paint.

Mathematically, the C's still have a chance at grabbing first but will most likely hold onto second place. They will look to grab their 51st win of season on Thursday when they travel to Atlanta to take on the Hawks.

In the three games that Cleveland's 'Big 3' has faced the Celtics this season, all three average a combined 78 points. Without collective offense from the starting lineup along with their second unit, the C's just simply don't have enough firepower to counter the NBA champs.

Cleveland also dominated the Celtics on the glass -- where they out-rebounded the C's, 51-38. Kevin Love pulled down a game-high 16 rebounds.