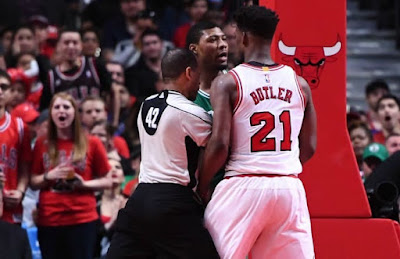 Jimmy Butler isn't backing down from Marcus Smart. In fact, he's fed up.

After the Celtics' 104-95 Game 4 win over the Bulls, Butler had a some words for the Celtics backup point guard while questioning Smart's toughness.


"He's a great actor, acting tough, that's what he does -- but I don't think he's about that," Butler said. "And I'm the wrong guy to get in my face. So he needs to take it somewhere else because I'm not the one for that."

Butler and Smart got into each other's faces in the second quarter of Game 4 when Smart pulled down a rebound off a made basket and pushed Butler to create space for the inbound pass. The two were separated and each were handed a technical foul.

Was that the first time Butler and Smart got into it?


"Yeah, that's the first time. Last time, too," Butler said. "We're not gonna sit here and get in each other's faces. Like I said, he's not about that life. So he's calming down."

Smart, who is notoriously known for flopping, is easily the most unpopular member of the Celtics. It's not the first time he's been involved in a dust up and it certainly won't be the last.

Butler, along with other Bulls players, will most likely try to trigger Smart for the remainder of the series. It'll be fascinating to see how things unfold.