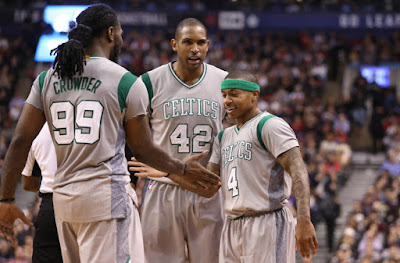 Everyone who has read my articles or has heard my commentary via the Causeway Street Podcast or any other media outlet knows I am as realistic as I can possibly be about my beloved Celtics.

I have been a diehard since 1998 when a young kid from Kansas named Paul Pierce burst on to the scene scoring from everywhere on the floor and displaying one of the most poetic shooting touches I've ever seen.

Since then, I've watched this franchise have its worst losing streak in its history, its lone championship of my lifetime, and a few trades that still have the NBA scratching its head. All and all, the Celtics have been a wild ride that seems to be trending into a better place every season Brad Stevens and Danny Ainge call Boston 'Home.'

With all of that said, the 2016-17 Celtics have been a team in my crosshairs all year long. For me, the season started after an unceremonious first-round ousting at the hands of the Atlanta Hawks from last season's playoffs.

A season and team that found a way into my heart and made me a believer in that young group of scrappy kids who just wouldn't quit could go into the home of a team who would win every other home game that season and win one of the most thrilling regular season games of my lifetime (that was the win at Oracle Arena against the Golden State Warriors for those who didn't follow).

That young team made it into the Eastern Conference playoffs with 48 wins and secured a fifth seed that was well earned with a defensive brand of basketball that fit Boston all too well.

Unfortunately, we all learned that grit and determination without enough talent can be beaten by teams who do employ better talent.

My sorrow and disappointment quickly turned to optimism when the Celtics landed the third overall pick in the 2016 NBA Draft. Boston hadn't picked that high in years and this was a chance for the Celtics to make a move and improve that 'talent gauge' we all hear about so often in the NBA.

Trade the pick and add a player we can build around such as Jimmy Butler, Paul George, Gordon Hayward...hell, we even kicked the tires on guys like Jahlil Okafor and Nerlens Noel! But in the end, Danny Ainge and his staff decided to take all six of it's picks and add one player from that group to its 2016-17 roster (not counting the 15 minutes Demetrius Jackson played all season).

So there I sat wondering what the hell had just happened? Boston had drafted six players, two who would play in foreign countries for the entire season, two who were primarily in the D-League, one who didn't even make the opening night roster, and one who was a good player on the second unit....I wept. AGAIN, heartbroken by the team I love so dearly. Backstabbed by a front office who's best decision is indecision.

Not more than a few days later, The Celtics were back to turn my frown upside down. Rumors spilled on to the front pages of the sports section of a 'chance' to sign two marquee free agents in the 2016 free agency pool.

The first was a man who was no stranger to Boston, having played them weeks before in the NBA postseason, Hawks forward/center Al Horford. Horford was a player I had admired from a far for years. Since his fantastic run with one of the greatest college basketball teams of the 21st century at the University of Florida, Horford had been an NBA All-Star and a top player in the league for the better part of a decade.

The possibility of adding Horford was a thrill, only to be outdone by our other prospective signee, Oklahoma City Thunder's very own Kevin Durant. Rumors aplenty, Boston was one of several teams who were granted a 'meeting' with the superstar free agent, this was more then enough to get every Celtic fan naming their newborns Kevin, Kevina, Durantula, or even KayDee (none of that ever happened but you get the picture).

In the course of one week, we went from despair, to ecstasy, to complete confusion. The confusion, how did we ONLY land Al Horford? Yes, it happened. We lost out on the biggest free agent prize in NBA history, to a team we beat and proved we were better than (we don't know how a Celtics-Warriors Finals would have played out). What we got instead was the solid, working class Al Horford who we all greeted with open arms but broken hearts.

Fast forward to November 2016, the Celtics looked like a new team (not for the better) and were struggling to get back over .500 and a team of scrappy kids had graduated into an entitled group of 'stars' without the skill of stars.

It was around this time that I had a difficult decision to make, to like the 2016-17 Celtics or not like them (and still watch them). I chose the latter. The team had only moderately improved it's talent and seemed destined to be in NBA purgatory as a team that would win enough to make it seem like they were relevant but not have enough to do anything truly impressive by franchise standards. But as I took off my Green 'Clinic' Celtics t-shirt for the winter, the Boys on Causeway Street came alive.

After a fantastic run that spanned the holiday period into the new year, Boston was back in the running. A flatlining fifth or sixth seed became a first-round home seed, then again jumped to the possibility of missing the Eastern Conference elite Cleveland Cavaliers in the second-round altogether. Things were back on track for the Celtics, who moseyed into All-Star break as a clear cut top-3 team in the East and would have a strong possibility of grabbing home court advantage for at least the first two rounds of the playoffs.

The Celtics however, had bigger dreams...

Boston would come out of the break slow but ended up picking up where they left off. Meanwhile, the Cleveland Cavaliers decided "regular season basketball is stupid" - LeBron James stopped caring about winning. Boston seized the opportunity and heading into the last week of the NBA regular season had a chance to do what nobody believed was possible, secure the top seed in the East and have home court advantage until the NBA Finals!

The Celtics did their job. Winning its last two games against Brooklyn and Milwaukee when Cleveland kept it's promise of not caring about the NBA regular season worked (for Boston) and now forced me into the second biggest decision of the season, should I emotionally invest into a team that was virtually no different than it was five months ago?

While it may sound sarcastic (and it is) the decision to love the Green was never a decision at all. I've always loved this team but it took until they loved us back and showed they are the anti-NBA Elite for me to truly see why the 2016-17 Celtics are EVERYTHING to real basketball fans.

The C's are a heartbreak waiting to happen but they do represent all that is good about the NBA. A team who is willing to be the underdog and fight for every inch, a team that nobody would choose to win the East, a team that is led by one of the league's most unlikely superstars.

Boston Celtics fans are many things but loving this team (while not for the faint of heart) is the best decision you can make.

Why not support a team that will collectively cry legitimate tears regardless of how their season ends?

Why not support The Little Green Team That Could?