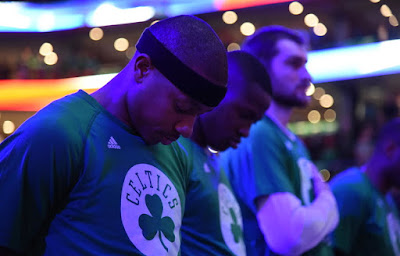 The Celtics undoubtedly like to run their fast break offense.

It's a style of play that helped them win 53 games during the regular season but throughout their first two games in the playoffs, the C's have suffered from poor offensive possessions and will have to change their ways if they want to change the complexion of the series.

Trailing the Bulls 2-0, Boston is in a must-win situation. They face the tough task of winning a playoff game on the road and are going to have to uncharacteristically change their pace in order to get back in the series.

Celtics coach Brad Stevens alluded to his team's tempo after Game 2's 111-97 loss and pointed to Chicago's defense, along with their big men, as a reason why the Celtics never really found their offensive momentum on Tuesday.


"We were sped up a little by their defense," Stevens said. "Their length and ball pressure and Wade and Butler and Rondo and their bench and their bigs are really up and active and utilizing their length on us."

The Bulls forced 16 Celtics turnovers and converted them into 23 points. That's less than 25 percent of the Chicago's scoring -- which doesn't seem like a lot but when you add that to Jimmy Butler and Dwyane Wade combining for 44 points, coupled with the Celtics allowing 12 offensive rebounds that turned into 14 second-chance points -- it was just enough scoring to keep the Celtics at bay.

More importantly, the turnovers and missed shots were a momentum-killer for the C's. Jae Crowder, who put up a solid scoring night on 6-of-11 shots for 16 points, said the Celtics panicked when the Bulls built a double-digit lead and admitted him and his teammates started rushing possessions -- which eventually led to a 19-point second half deficit.


"One time they went up 10. We tried to get it back in one play," Jae Crowder said after Game 2. "That's not how basketball works. This time of the year, you can't just shoot for home run after home run. At times it felt like that's what we did. It backfired and hurt us."

For a team that averaged 107.8 points in the regular season -- seventh in the league -- the Celtics have the personnel to rack up buckets but are going to need to slow down the pace in order to gain momentum. The best way for them to do so would be to use as much as the 24 second shot clock as they can and continue to seek high-percentage shots.

An encouraging stat in the Celtics' box score from Game 2 is their 52 points in the paint, along with their 14-of-19 attempts at the free-throw line. They just couldn't outlast Chicago's fourth-quarter scoring outburst -- where they went on a 14-4 run -- which was triggered by Boston's rush offense.

The Celtics cannot rely on 3-point shooting either, especially if they fall behind by double figures -- something they certainly did in the fourth quarter of Game 2. They've attempted 71 3's already in the series, while shooting 33.5 percent from behind the arc.

The Bulls shot a combined 46.7 percent in both Game 1 and 2 of the series. And with Butler and Wade capable of closing out games, they can certainly close the door on the Celtics in Game 3 and eventually in the series if the Celtics don't dictate the pace early and often.