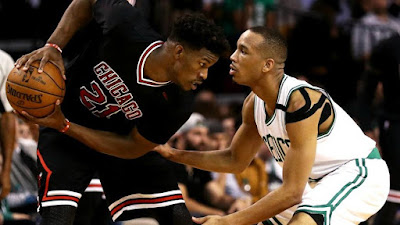 The Celtics defensive specialist went on to express how he used the Bulls All-Star's comments as motivation to help his team crawl out of a 0-2 hole and end Chicago's season.

Bradley scored a playoff career-high 24 points in Boston's Game 5 win at the TD Garden, two days later he followed that up with a 9-of-12 shooting night in Chicago to lead the Celtics with 23 points in a series clinching victory at the United Center.


"You want to know something, I took [Butler's comments] personal," Bradley said. "There was a few guys that walked up to me and said -- I think Jimmy had said [after Game 5], 'We can't let guys like Avery Bradley score 20.' And I usually don't say anything. I just go out there and play hard. But I feel like every player should respect this game and respect the guys that go out there and prepare every single night.

Despite Jimmy Butler shooting a limited 37-percent in six games, due to Bradley's tenacious defense, the Celtics guard still praised the Bulls star throughout the series.

Bradley, who was first-team All-Defense last season, has said time and time again that he would like his peers around the NBA to view him as a two-way threat. Bradley averaged a career-high 16.3 points and 39-percent (team leading) from behind the arc during the regular season. Being a teammate of Isaiah Thomas, who is an MVP candidate, can easily cause many to overlook what Bradley has done this season for the Celtics.

When Al Horford was asked if he thought Bradley had proven his offensive game belongs on a playoff stage, the big man answered with a huge smile: "He showed a little bit."


"Man, Avery has been amazing. I don't think he gets the amount of respect and credit of what he's been able to do, first of all guarding a guy much taller than him, and just being relentless on both ends of the floor. Because he's not only locking people down on defense but then, offensively, we're expecting a lot from him and he's giving it to us. The last couple of games he caught fire a little bit but he's been the difference for us. And I'm just happy to see him finally healthy. Earlier in the year he had some health issues. But now he's good and we're playing at a high level."

In 2016, Bradley only played in one playoff game (ankle) when the Celtics were eliminated by the Hawks in six games, and while this season he played in only 55 games due to an Achilles injury, Bradley is a huge reason Boston has advanced to the second-round for the first time since 2012, despite the ups and downs of the last calendar year,


"I'm happy for [Bradley]," Celtics coach Brad Stevens said. "It was a strain those two months he missed [with the Achilles injury], but I'm glad it wasn't April and May. We talked about that, joked as a staff that, as much as we were injured during the season, at least it wasn't the postseason. We've been fortunate -- knock on wood -- to stay healthy and Avery has been in midseason form. The way he's playing right now, maybe that time off was good for him."

Bradley will have his hands full come Sunday with John Wall and Bradley Beal, when the Celtics take on the Washington Wizards in the Eastern Conferance Semi-Finals.