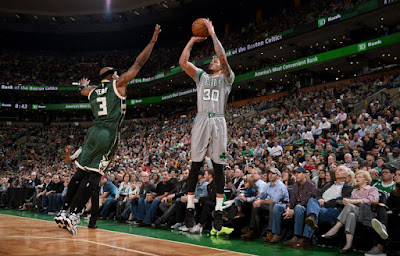 The Celtics clinched the No. 1 seed on Wednesday, beating the Bucks in their season finale while raising the level of expectations as they head towards their opening round series.

In a 112-94 victory at TD Garden, the Celtics offense woke up just before halftime, dozed off at the start of the second half and finished strong in the final frame. Isaiah Thomas, who went scoreless for most of the half, catapulted the C's to grab their first lead of the night (57-56) by dropping 10 points in the final three minutes.

After a neck-and-neck third quarter, the Celtics battled relied on their outside shooting -- which helped them cling onto a two-point lead heading into the fourth quarter. Just when it felt like the contest would come down to the wire, the Celtics went off, putting together a whopping 27-4 run.

Gerald Green finished with a game-high 18 points, Amir Johnson and Jae Crowder both scored 16 points and pulled down 5 rebounds and Isaiah Thomas added 13 points and 8 assists.

Before the game-deciding fourth-quarter run, the Celtics' offense looked shaky to say the least. It wasn't a matter of committing turnovers -- the C's limited themselves to just 8 -- however, the shot selection wasn't at its best.

The Celtics chucked up nearly 30 3-pointers through three quarters but found their rhythm just in time, along with their defensive intensity. Boston forced 17 turnovers.


"It's very special. For me it is," Isaiah Thomas said after playing 23 minutes, including sitting out the fourth quarter. "I've never been a No. 1 seed. I'm excited now. But once you get the playoffs, the seedings go out the window."

As the No. 1 seed, the Celtics will take on the Chicago Bulls in their opening series on Sunday. Game 1 tips-off from the TD Garden beginning at 6:30 PM on TNT