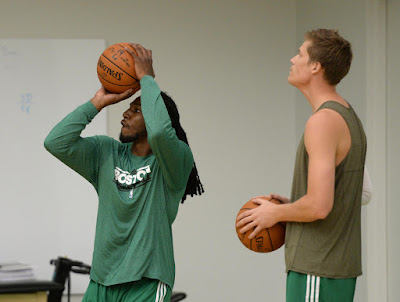 Celtics forward Jae Crowder sat out of practice on Tuesday after an MRI on his left elbow revealed no structural damage. Crowder confirmed he's day-to-day after he removed himself from the third quarter of Sunday's win over the Knicks, due to his elbow being 'sore and painful,' could likely be out against the Cavaliers come Wednesday.

"No structural damage, so [that's] pretty good," Crowder said to reporters in Waltham. "Very, very tender and sore right now. I sat out of practice [Tuesday] and hopefully when I wake up [Wednesday] we'll have a better sense of if I can play tomorrow night. I think it's a day-to-day thing, but I do have [a late-season ankle injury last season] in the back of my head [and] the possibility of going into the playoffs as close to 100 percent as possible. That's how I'm going to gauge it, day-to-day. But, of course, if I feel like I need to take time before playoffs, I will do so." [ESPN Boston]

Crowder spoke to the media with his elbow wrapped in ice, says he doesn't exactly know how the injury occurred only that he's still waiting  for the swelling to subside. Celtics coach Brad Stevens has been cautious with injuries to his team all season, and will trust trainer Ed Lacerte moving forward.


"Obviously he's very sore [Tuesday]," Stevens said. "He did some shooting before practice, did not practice at all. So we'll see. But, obviously, yeah, we're always going to be [cautious]. If he could injure it further or if it's anything but just dealing with the nagging pain, then we would err on the side of being conservative for sure. But, ultimately, that's his call and Eddie's call. That won't be my call." [ESPN Boston]

The Celtics, who host the Cavaliers in less than 24 hours, are in a virtual tie at 50-27 for the best record in the East. Cleveland leads the season series 2-1, while Boston will need all hands on deck to fight for the number one seed with five games left before the playoffs begin.


"We're different when we don't have anybody out there but especially [Crowder]," Celtics All-Star point guard Isaiah Thomas said. "He can guard multiple positions. He can space the floor and hit the 3-point shot. If he doesn't play, we'll be a little different, but we'll try to figure it out the best we can. I think it's been like that all season. With guys being out, we've just got to figure it out on the go. But he's a big part of what we do here and hopefully he'll be ready." [ESPN Boston]

Meanwhile, Avery Bradley made his return to practice on Tuesday after missing the last two games (four games overall) due to the stomach bug making its way back. The veteran was hospitalized over a week ago and received fluids.


"[Bradley] looked great today. Looked fresher," Stevens said. "I thought both games at home last week he looked like he was still fighting the aftereffects of being sick. Obviously with it recurring, it did give him a chance to get some rest, which has been good. And he feels pretty fresh today. He looked good." [ESPN Boston]

Bradley has missed a total of 27 games this season, though 23 of them were due to an Achilles injury, he did admit he returned too soon with this latest bout of illness.


"I think the doctors and stuff just saw how I was looking [last week] and how my body was looking, and they just said it wasn't smart for me to play," Bradley said. "They didn't want to put me in a situation where I could have potentially got an injury. I just wasn't feeling good. ... I'm just trying to stay hydrated, making sure I'm getting IVs and drinking water." [ESPN Boston]

For the time being, it's unknown if the Celtics will be at full strength come Wednesday when they take on the Cavaliers, who are coming off a win on Tuesday against the Magic in a first night of a back-to-back. Either way it should be a good one at TD Garden.

You can catch the showdown on ESPN beginning at 8 PM.