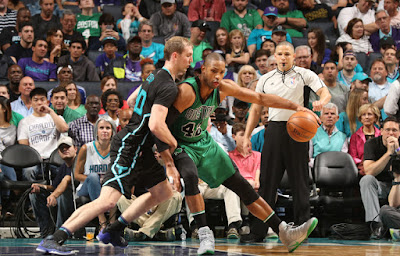 The Celtics still remain hopeful of grabbing first place after a much needed 121-114 win over the Hornets at the Spectrum Center on Saturday night.

Boston (51-29) led by as many as 19 points behind Isaiah Thomas, who finished with 32 points and 6 assists to help the C's snap a two-game losing streak and maintain in the race with the Cleveland Cavaliers, who are 51-28, a half game ahead for the best record in the East.

Al Horford woke up out of his shooting slump (went 7-of-15 from the field), scoring 15 points and dishing out 7 assists. Jae Crowder added 15 points, 9 rebounds while Avery Bradley also chipped in with 15 points to go along with 6 rebounds and 4 assists. Kelly Olynyk started in place of Amir Johnson (illness), as he contributed with a double-double of 13 points and 11 rebounds in the win.

For the Hornets, who are 36-44, Nicolas Batum led the way with 31 points, 8 rebounds, Kemba Walker finished with 23 points and 8 assists. Jeremy Lamb added 17 points and 5 rebounds off the bench for Charlotte in their home finale.

The Celtics went off for 71 first half points and nearly 63-percent shooting (including 11-of-21 from behind the arc) to take a 17-point lead into intermission. The Hornets, who lost their coach Steve Clifford to an ejection (two techs) before halftime, chipped away and eventually grabbed a seven point lead halfway in the fourth quarter.

With 6:37 left in the final frame, Brad Stevens called a timeout in order for his team to regroup


“When we were down seven, I wasn’t worried,” said Avery Bradley. “I looked at Isaiah (Thomas) and I was like, ‘We’ll come back if we make the right plays, get stops on the defensive end and stop fouling.’”

For the next few minutes the Celtics would keep it close as Bradley knocked down a couple of 3-pointers, in that span. Thomas hit a go ahead layup with 2:13 remaining to put Boston up for good (111-109) while Bradley (11 points in the quarter) hit one more three from the corner to ice the game, sweeping the season series with the Hornets 4-0.


“They put us in a corner,” said Brad Stevens. “That’s hard when you’ve had the lead and they take it all the way up to seven. To come back and win it, it shows a lot of resolve.”

With the win, the Celtics eliminated Charlotte from playoff contention with two remaining on their regular season schedule. Boston will head to the TD Garden on Monday to take on the Brooklyn Nets followed by the Milwaukee Bucks on Wednesday in their home finale

The Celtics ended the fourth quarter on a 24-10 run to capture their 51 win. Isaiah Thomas finished averaging 29.2 points in four games against the Hornets this season.