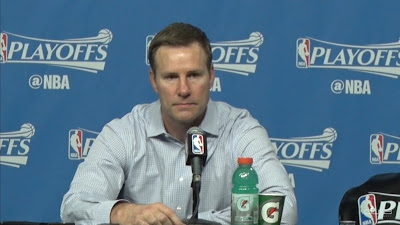 Just when Fred Hoiberg couldn't look any more petty than he did after Game 4, he goes and walks off in the middle of his postgame press conferance after the Celtics beat the Bulls in Game 5 to take a 3-2 lead.

If you recall when the Celtics beat the Bulls on Sunday to even up their series 2-2, Hoiberg went out of his way to call out Isaiah Thomas for carrying the ball or double-dribble. Basically going as far as saying he believes the All-Star point guard travels every time he drives to the hoop, and the refs have been letting Thomas get away with it.

Thomas replied to this claim by Hoiberg in his first comments and postgame conference of the postseason on Sunday as well.


"I've been dribbling that way my whole life," explained Thomas. "Not one man can guard me."

When asked to further elaborate on what he thought about Hoiberg's complaint Tuesday during the Celtics practice in Boston, Thomas had this to say.


"I only know one way how to dribble," Thomas said to to the media. "I’ve been dribbling the same way my whole life. Maybe it was strategic or something. I don’t think they’ll call it on me."

“Dwyane Wade, Rondo, LeBron (James) … I dribble just like everybody else, I was very surprised,” Thomas said of Hoiberg. "Out of everything else that I do on the court, you want to bring that up. It is what it is. I’m going to continue to dribble the ball the way I know how.” [CSNNE.com]

So begs the question a game later on Wednesday night after Isaiah Thomas finished with 24 points, 5 rebounds, 4 assists, with lots of ball touching and dribbling. Causeway Street's own Josue Pavón had to ask the burning question on everyone's mind to Fred Hoiberg:


"Did you see Isaiah carry the ball at all in this game?"

"No." replied the Bulls coach as he stood up and walked out of the pressroom at the TD Garden and probably immediately onto his bus, then the team plane back to Chicago.

He's probably still walking with his head down as you're reading this right now.

After less than a five-minute presser with a look of frustration on his face, Hoiberg, who brought the issue of Thomas 'carrying' to the forefront, simply refused to further explain his original point. Most likely because he didn't what to be handed a fine (which he was lucky not to receive in the first place on Sunday) for essentially criticizing the refs some more.

But what a moment Celtics fans will remember about Hoiberg and this series.

Boston will look to keep the Bulls looking like their coach, confused and defeated when they head to Chicago to try and close this out in six, Friday night on ESPN.

Check out Fred Hoiberg's response when asked about Isaiah and his full post-game conferance below:

ICYMI: It was our very own @Joe_Sway who got Freddy boy all salted with his question about Isaiah! #Celtics #Bulls #NBAPlayoffs pic.twitter.com/4DoZSWWFMW
— CausewayStreet (@CausewayStreet) April 27, 2017