Paul Pierce, Kevin Garnett reminisce about the Celtics & how they met 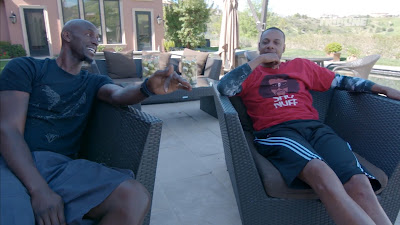 On the same day that the Celtics officially clinched the No. 1 seed in their finale at the TD Garden, and Paul Piece played in his last NBA regular season game out in Los Angeles, 'The Truth' released another chapter to his Player's Tribune multimedia series project: "I Called Game"

Pierce has been documenting his 19th and final season as a pro and in his latest post simply titled: Me & KG, he and Kevin Garnett recalled the first time their paths crossed.


"I first met this tall, skinny kid from South Carolina named Kevin when we were both still in high school," said Pierce. "I got to show him around Inglewood, California, when he came out here for an AAU tournament." [Player's Tribune]

Garnett had never been to California, and he remembers his first glimpse of Paul Pierce putting up jump shots at a local gymnasium.


"At the time [Paul] was a little big," Garnett said. "But he had ups! I was like 'man this boy has some bounce to him.'" [Player's Tribune]

The five-minute video has the two former Celtic teammates reminiscing about they're time in Boston and how they knew in year one that they would win a championship.

Pierce, who on Monday scored 10 points (six minutes of action) in a 125-96 Clippers win over the Rockets, passed Celtics icon John Havlicek for 15th on the NBA career scoring list with 26,397 points. It's hard to believe its been nearly a decade since he and Garnett helped bring banner number 17 to the Garden rafters.


"We knew we couldn’t wait," said Pierce. "We just hit the ground running, like we’d been playing together for years. I think the secret that first year was that we were all comfortable being ourselves. KG and I both came from losing teams. Us being in Boston was about what we were trying to achieve together. So we asked ourselves, Is it about numbers, or is it about winning?" [Player's Tribune]

To watch the full video of this great conversation between two Celtic legends and future first ballot Hall-of-Fame inductees click below: