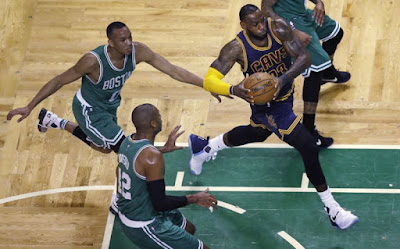 Celtics find themselves tied with Cleveland once again for the best record in the Eastern Conferance after the Cavaliers loss back-to-back home and home matchups with the Atlanta Hawks in the last 48-hours.

It was believed after last Wednesday night's blowout loss to the Cavs, that all hope for Boston to finish with the first seed went out the window. But thanks to Atlanta, who have gone on a hot streak as of late, beating the top two teams in East with and without their starters, there is still a chance for the C's to grab the No. 1 seed again.

Though Cleveland owns the head-to-head tiebreaker (won season series 3-1) with the Celtics, they'll have their hands tied on Monday when they take on the Miami Heat, who are looking to clinch the final playoff spot (currently tied for eighth with the Bulls), followed by the Toronto Raptors (fighting for the third seed) on Wednesday in their regular season finale.

Meanwhile, the Celtics, who beat the Hornets on Saturday night, host the Brooklyn Nets on Monday night and wrap-up the season Wednesday when they take on the Milwaukee Bucks at the TD Garden.

The odds are still against Boston, depending if Cavaliers coach Tyronn Lue decides to rest his starters for the last two-games, therefore forfeiting the top spot to whoever wants it.

Bottom line the Celtics can do their part of winning their two remaining games and hope Cleveland splits their matchups against the Heat and Raptors or if Boston spits their games against the Nets and Bucks and the Cavs lose both their last two outings and the C's clinch the top seed with one of those two scenarios.

Both the Nets (the worst team in the NBA) and the Bucks (beat the C's over a week in a half ago) are winnable games for the Celtics. But as of late Boston's defense has been up and down while allowing well over 100 points per contest in their last 10-of-11 outings (average of 110.5 points allowed per game).

While the Cavaliers have been pretty vocal (along with the NBA commish) about needing to rest their players before making a deep playoff run (or at least the Finals). LeBron James, who leads the league in minutes played this season at 37.8 per contest, has been playing an average of 43.2 minutes since the start of April (including 47 minutes in an overtime loss to the Hawks on Sunday).

Either way, the Celtics could clinch another Atlantic Division title for the first time since 2012, with a win on Monday against Brooklyn and the rest will figure itself out on whether they'll finish as the first or second seed before this weekend when the NBA postseason gets underway.