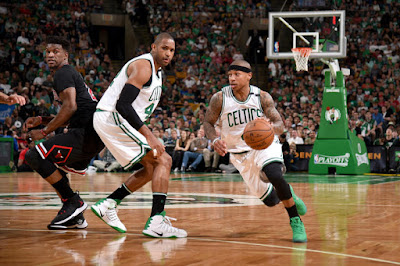 With a heavy heart, Isaiah Thomas took the floor and delivered one of the most impressive performances of his career. Unfortunately, the majority of his teammates fell short on offense, cleaning the glass and on defensive assignments down the stretch.

Jimmy Butler's offense, along with gritty defense by him and his teammates topped the Celtics, 106-102, giving them a 1-0 lead in the best-of-7 series. Chicago out-rebounded the Celtics, 53-36 and rallied behind Butler's 23 second-half points.

Butler, who was having a hard time finding his shot in the first half, made all eight of Chicago's final points in the third quarter and tied the game at 74. Through three quarters, three Celtics players had at least 14 or more points (Thomas, Horford, Bradley) but were a minus-16 on the glass (45-29) -- where the Bulls owned the rebounding matchup.

In the fourth quarter, the Bulls led mostly throughout but never grabbed a big lead until the tail-end of the frame. With 5:33 left, Thomas drew a shooting foul from behind the arc and drained all three -- tying the game at 87.

After Thomas converted three from the charity stripe, a trio of blunders by the Celtics changed the complexion of the game. Bradley fell one step behind Butler, who made the inbound pass before getting it back and knocking in a mid-range jumper and on the very next play Thomas lost track of the 24-second shot clock.

Jerian Grant made him pay for that mistake by draining a 3-pointer, which made it a two-possession game (92-88). And after the Celtics failed to convert on offense, Bradley got his hand caught in Butler's chest while fighting through a screen and committed a shooting foul from behind the arc and Butler drained all three, giving the Bulls a seven-point lead.

From there, the Celtics managed to rally back in the final minute by forcing turnovers and drawing offensive fouls. Thomas' layup with seven ticks left pulled the C's to within two points (104-102) before Butler iced the win with a pair of free-throws.

For Thomas to made 10-of-18 from the floor under such stressful circumstances is an impressive feat. Despite committing 6 of the Celtics' 15 turnovers, the team's leading scorer kept his team in the game throughout 48 minutes.

Celtics came out of the gate shooting from the perimeter -- where they netted 5-of-12 from behind the arc. Thomas had a hot start, he scored 13 first-quarter points on 4-of-7, including a pair of 3-pointers.

Horford brought the C's to within two after scoring nine straight, topped off by a buzzer beating 3-pointer just before the break. It felt like him and Thomas were the only Celtics players who could finish at the rim as the Bulls' big men swatted three shots at the rim while the team finished with 7 steals in the half.

Thomas rekindled some of his offensive touch from the opening frame -- scoring six points midway through the quarter and Crowder converted three backdoor layups -- his first points of the night. Both guys made buckets down the stretch but the Celtics struggled in slowing down the Bulls on defense while Chicago forced a 2-minute Celtics scoring drought just before the final minute of game.

The Celtics will look to knot the series at one game apiece on Tuesday in Game 2 at TD Garden.

After the Celtics got off to a quick start from outside, the Bulls buckled down their post defense -- especially in the fourth quarter. Bobby Portis was the spark plug off the bench, scoring 19 points and finishing with two blocks, including a block on Crowder with under three minutes left. Him, Lopez and Butler combined for 29 of their team's 53 rebounds and pestered the Celtics on both ends of the floor.