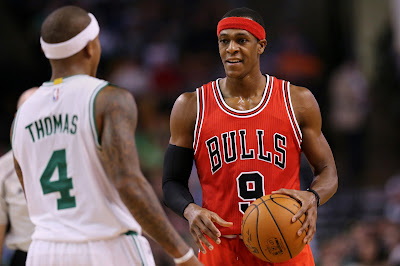 I think any Celtics fan would agree that this season has been a complete success as the regular season rolled to an outstanding close with an emphatic win over the Milwaukee Bucks on Tuesday night.

The win capped off the best regular season the Celtics have had in nearly a decade and has fans dreaming of some playoff success as a first-round match up against the hapless Chicago Bulls was secured, along with the Eastern Conference's No. 1 overall seed.

While some fans will debate the relevance of being the top regular season squad in the East, one thing we can't debate is the Celtics match up with a Bulls squad who seem more apt to start summer vacation in April than making a serious run this postseason.

On the eve of the opening of the NBA playoffs and as the C's get ready for Game 1 against the Chicago Bulls, we take a closer look at some of the keys to success for Boston throughout their series.

While this may seem too obvious, Chicago's strength is in it's veteran perimeter players Rajon Rondo, Dwayne Wade, and All-Star Jimmy Butler. The trio (while depleted and in most cases over the hill) can still go off for spurts of electric plays that has fans reminiscing of what these players used to do a few short seasons ago. Simply put, Boston needs to contain an aging Rondo and Wade while limiting Butler to his season averages.

If they can do this defensively the Celtics should be able to match up with Chicago in the frontcourt favorably (one of the few teams in the NBA that Boston may have a distinct advantage over) and ultimately force the Bulls to come up with creative ways to make shots (which they have rarely done this season).

In addition, Boston will need to be able to score on the perimeter as well. If they can keep spacial integrity on the offensive end, Isaiah Thomas should be able to get some good open looks and allow Avery Bradley some of his famed 'top of the key' threes. If the Celtics can defend the perimeter and knock down open shots at their potential, this could be a quick series and the other points to this article will be null and void.

As mentioned in the opening, Chicago is more likely thinking of beaches in St Lucia than a second round match-up against the Atlanta Hawks or Washington Wizards. With that in mind, Boston needs to create adversity on the Chicago bench and locker room. While the Bulls should be able to overcome a bad start to a game with its veteran laden lineup, adversity and big personalities have been the kryptonite for this iteration of the Bulls. If Boston can get off to quick starts and play its physical and fast brand of ball, expect Chicago to toss in the towel and let the Celtics have their way.

This series is likely going to be won on the perimeter with a vast majority of both teams' shot makers being guards or perimeter forwards. With that said, this is a series that Al Horford should thrive in. Horford will only need to contend with Robin Lopez on either end of the floor and should be able to beat him in every way possible.

Look for Boston to get Big Al involved all series long and if Horford can have a few big performances it may help him and the Celtics twofold. First, by showing the doubters that his contract was signed with postseason success being the driving motivator and secondly, by giving opponents in later rounds something to think about when game planning for Boston.

Bold Prediction: Al Horford beats his scoring, rebounding, and assists averages from the regular season in every game of the series. Thomas will still lead the Celtics in scoring but Horford will be the series MVP.

While Chicago has played some of its best basketball of the season leading up to the playoffs, the Celtics have lucked out by getting this gang of misfits in round one. The dysfunction of the Bulls locker room should do them in at some point in the series but even if they overcome that fundamental flaw they still would need to be better than Boston, which isn't the case. Expect Chicago to steal a game or two in the series but the Celtics should be confidently through into round two of the Eastern Conference playoffs.