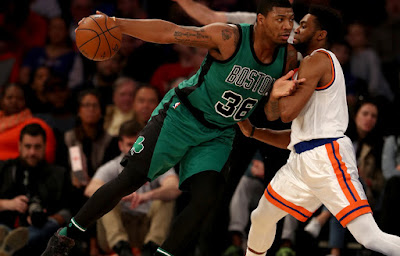 The Celtics reminded everyone why they are at the top of Eastern Conferance as they picked up their 50th win of the season with a 110-94 win over the the New York Knicks on Sunday.

Boston (50-27) has a busy week ahead, including a final showdown at home against the NBA champion Cleveland Cavaliers (49-27), as the two teams continue to battle for the best record in the East.

Isaiah Thomas, who got some much needed rest in the fourth quarter, after leading the Celtics with 19 points and 6 assists in 24 minutes of action, was very animated with a smile ear to ear while cheering on his teammates.


"I've never won 50 games in my NBA career, so definitely was an individual goal of mine coming into this season to win 50 games and I'm just glad we got to that," Thomas said. "But like I keep saying, we've got a lot more work to do."

Jaylen Brown finished with 16 points in his second consecutive start for Avery Bradley (illness), while Al Horford added 14 points, 7 rebounds and Marcus Smart also chipped in 14 points and 5 assists. Terry Rozier and Kelly Olynyk each scored 12 points respectfully off the bench for the Celtics.

For the Knicks, they were without Carmelo Anthony (back) and Derrick Rose (knee). Courtney Lee led the way with 16 points, 5 assists and Kristaps Porzingis added 14 points. Willy Hernangomez chipped in 12 points for New York, who have long been eliminated from playoff contention at 29-48 on the season.

Boston never trailed in this one from opening tip to the final buzzer, and turned in a 60 point first-half while shooting 60-percent from the field. The third quarter proved to be just as worst for the Knicks, as the Celtics pushed their lead to 27 points.

It was only the second time this season, the C's starters all played less than 30 minutes, as 35 of their 77 contests have been decided by two possessions or less.

The last time the starting unit sat out the fourth quarter was against the Knicks back in early November.


"Couple years ago I would've thought that that was going to be something that we were really going to have to build for a while to, but I thought that obviously we've been lucky to strike on a couple of guys," coach Brad Stevens said. "Everybody's got a like mind with regard to the bigger purpose of playing for the Celtics and trying to compete every night.

With five games left in the regular season, the C's will have a couple days off before they have a back-to-back against the Cavs (ESPN) and Hawks (TNT) on Wednesday and Thursday night.

Avery Bradley missed his second straight game due to a stomach bug, he could be back at practice by Tuesday. Jae Crowder left midway through the third quarter due to a sore left elbow, that he called 'weird and painful'. Initial x-rays were negative in New York, he is set to have an MRI when the team returns to Boston. The Celtics have their first 50 win season since the 2010-11 campaign.